My Favorite Photos: The Carnival Scrambler 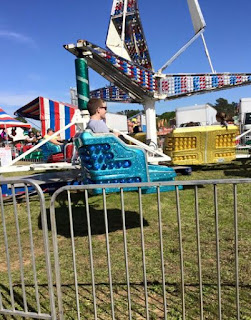 This ride used to scare me to death when I was little. My brothers and cousin would run to it happily at a little carnival called Party in the Pines down in Whitmire, SC but I never rode it until many years later. My wife hates the ride as it makes her feel sick. So I rode this one solo. It's much different not having another person especially as you always get "thrown" to the right. I think this one is also faster than the one I was used to at Carowinds in Charlotte, NC. Because by the time it was over, I was long-since ready to get out. I've never had a ride make me vomit before, but I think a few more minutes might have done it.
Posted by Adam at 5:00 PM

I gave up carnival rides a long time ago. They made me sick every time.So just stroll around and enjoy the sights.

I remember liking this ride when i was a kid.

yes this one makes me sick.

I don't go on many rides anymore. As I get older, I tolerate them less and less!

It make my grandmother sick too, but I love similar ones as on on the photo, that not so scary.

I can handle the rides that go round, up and down, as in Ferris wheels...the ones that go around in circles, other than the Merry Go Round, usually make me sick as a dog.