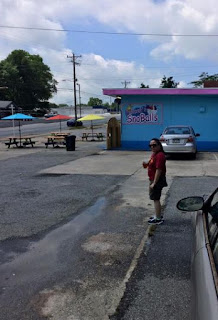 A new shaved-ice place called Pelican Snoballs opened up in our town, and it was near Daisy's favorite restaurant. Since it was our first year anniversary that day (May 1st) I figured I'd take her there for a dessert of sorts. 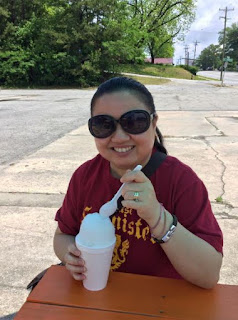 Like most places like it, you have almost countless flavors to choose from. Daisy wanted the pina colada flavor. I'm not much of a fan of that flavor so I chose something different. 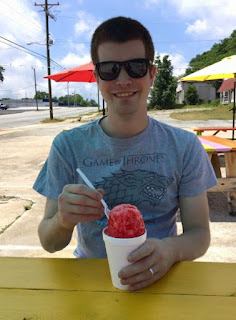 During my little league days, one baseball stadium had a stand that had shaved ice. I remember liking the flavor called Tiger Blood a lot, and they had it there too. It was almost like a hot summer day in May. so ours melted quite quickly.
Posted by Adam at 5:00 PM

How time does fly. Hard to believe it has been a year already.

We have one in our town too. Ive always wanted to get one of the menus and make it a challenge to try every flavor. Ive only had sour pickle and wedding cake. Happy Anniversary!
Lisa

I love these! I usually get grape or cherry.

A lovely way to spend time!