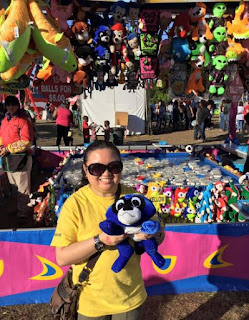 One of the last games we played at the carnival was the game were you throw ping pong balls at the floating cups. They were all different colors but most were clear. Getting one in the clear just gave you a few more tries. With luck I landed in the color that granted any prize. Except none of them were THAT GREAT. But Daisy chose this one for herself, a blue raccoon.
Posted by Adam at 5:00 PM

I feel like carnival stuffed animals are not that great or cute. but yey a prize is always a prize! and that blue raccoon is actually kinda cute ;) and you wife looks happy !

I'm sure Daisy loved adding it to her ever growing stuffed animal collection!

Congrats! That's not too bad a prize!

Daisy looks pleased with her prize ... and you had a fun time

I love the blue raccoon that Daisy chose, and she looks happy. :)