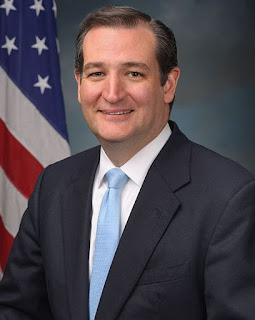 After claiming to stop Donald Trump from becoming the Republican nominee (through a contested convention) Ted Cruz just quit the race after losing Indiana even though he couldn't mathematically win anyway. And let's not forget the legality since he was born in Canada anyway. I sort have to wonder if he accepted a deal to be the Vice President pick for Donald Trump despite picking his own already and vowing to be Trump's bane. Trump-Cruz 2016 maybe? I think Make Irony Great Again is a wonderful slogan.
Posted by Adam at 11:00 AM

Wow! I didn't realize he was born in Canada.

I was surprised Ted caved before the convention, not that i could possible vote for either of these clowns.

Thank heavens one gone of the two top weirdo "G.O.P"
candidates - very short "stay in the sun for Cruz's VP
selection".
Trump and destiny and the quick downfall of the USA !!
"D.S.W.S" above - Sarah Palin !!! One clown on the stage at a time Debra will be enough, two would be an Armageddon disaster.
Americans have a choice - either Hillary or Bernie, but not HELL!
Cruz's pull out: Given coverage here on the evening news but the political talk shows focused on that trumpeting of the madman and the consequences if the US electorate falls for the "madman" whose political rallies are fast becoming similar with the gestures to a certain German of the 1930's who mesmerized a nation!
Herr Hitler hadn't declared war on any nation before he was elected and he was elected democratically - the first time!
Trump has already delivered ultimatums on walls to your southern neighbours, will blow the Middle East to Kingdom come and "tear up treaties" of long standing.
B J Hunnicut aka Colin

Kasich has surrendered now, too.

HAHA! That slogan is funny :)

We'll give ya Cruz for free!