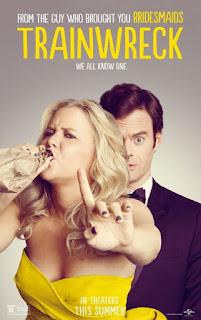 Amy Schumer's Trainwreck was a movie I had noticed last year but I didn't have enough motivation to see it in theaters. I know Amy Schumer has been a comedian since 2004 but she never got really big and notable until not that long ago. Her sense of humor isn't for everyone (especially for the older folks), but I think she can be funny and humorous most of the time. I also didn't know that Judd Apatow directed and produced the movie though Amy Schumer apparently wrote the whole thing herself. While the talent is there, wouldn't it be comically ironic if the movie was a metaphorical trainwreck? 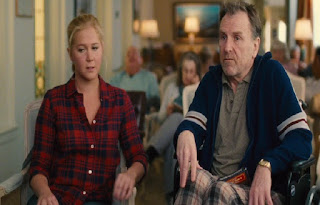 The protagonist is Amy Townsend who works at a magazine, with a rather bizarre boss. Her dad Gordon recently had bad luck with his health which causes Amy and her sister Kim to put their father into a sub-par nursing home. Their parents divorced when they were young because their father Gordon was not faithful to their mom. Amy parents' troubles affected her life as she grew up as she is almost paranoid and phobic of any kind of real commitment. And Amy will do anything in her power to keep herself from falling in love. Her sister Kim got married and raised a step-son, so their lives are a lot different. Soon after the father's health problems, Amy's boss gives her a new assignment to her annoyance. 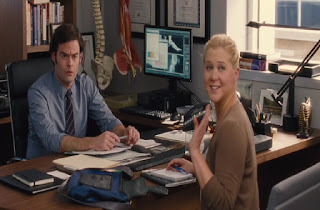 The task is to interview Dr. Aaron Conners who is a famous doctor who treats many people whom often happen to be famous sport athletes like LeBron James and Tony Romo. Dr. Conners almost immediately realizes that Amy knows almost nothing about sports. Though he is a sweet and caring guy so he helps her with her task. While working the two start to bond and begin to date. There's plenty of reasons why any woman would want to be with Dr. Conners, but Amy (despite liking him a lot) decides to try to reject him due to her phobia. Though Dr. Conners is crazy about her and will jump through hoops to win her heart. 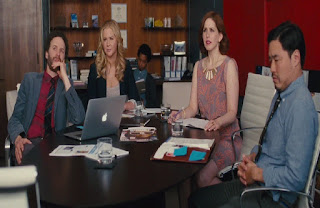 Trainwreck isn't nearly as a good I had hoped, but it's a decent romantic comedy. I think one of its faults is that it gets a little too much drama into the story which dulls the comedy. There's a lot of good cameos by famous sport athletes and celebrities which I liked a lot. It also runs about two hours which drags on quite a bit. Most comedies I know of are usually about an hour and a half so there does seem to be some filler there. It's a decent movie by Amy Schumer, but certainly not Judd Apatow's best work. I will say the bit with the intern Donald seemed stupid at first, but it got really hilarious near the end.

I really want to see that film!

I haven't seen it yet.

I agree with your review and would have given it the same grade.

I have this one on my dvr right now. I'll have to wait for a slow day to catch up on it.

haven't heard of this one...

I hated this movie! I tried to watch it and made it about halfway through. It wasn't very funny.