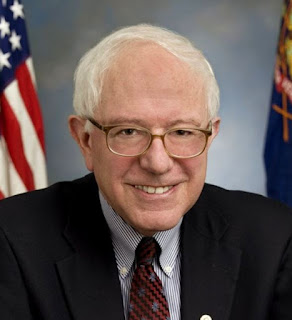 Being defeated in a bitter primary battle, Bernie Sanders admitted he'll most likely vote for Hillary Clinton in the general election without fully-endorsing her. When asked whether he'd vote for Trump he firmly expressed that was not even an option and that his defeat was the top priority. He also expressed that he wouldn't vote for the Libertarian candidate Gary Johnson but that's not much of a surprise. There was quite a bit of Anti-Clinton folks in the Feel the Bern movement and I'm sure a few will vote for Jill Stein of the Green Party as part of the "Bernie or Bust" pledge. While it's nice to think a 3rd party candidate has a chance of becoming president, it's not going to happen. It's not a reality, it's not even a dream, it's an impossibility.
Posted by Adam at 12:00 AM

Yes I heard he said that.

There is no bigger disaster than Trump being elected president. If you don't like Clinton, hold your nose and vote for her anyway, Americans! Lesser of two evils. Don't throw your vote away or split Clinton's chances.

I am the opposite of DEBRA SHE WHO SEEKS...of COURSE...because I am a Republican and of ANYONE in the U.S., Hillary will be the worse president...people, get real...

Bernie attracted a lot of young people by making them promises he can't deliver on. Bernie is now like an old guy driving with his turn signal on while refusing to leave the road.

Trump would never be an option for me, too.

I'm 100% with you Debbie.
Trump is the worst potential Presidential candidate and for that matter US citizen possible to occupy the White House.
It was on the news here in Australia that Bernie WILL vote for Hilary and I am sure will encourage all his followers to do likewise.
B J Hunnicut aka Colin