Fact of the Day: Bible Luther 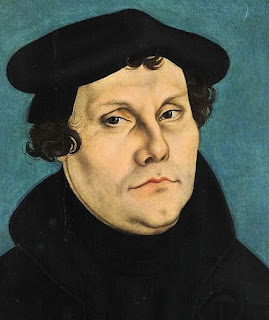 One of the major things Martin Luther did for reformed Christians (from the first major break from the Catholic Church) was make his own translation of the Bible into his native German. While there had been many translations of the Bible (including German) before Luther, the Catholic church often kept most of their Bibles written only in Latin though many common people in Luther's time (and well before of course) couldn't read any language including their native one.
Posted by Adam at 1:00 AM

I think it would be interesting to see exactly how the bible has changed its wording from the very original. I bet the changes would be astounding.

As someone who now lives in Germany, I find this interesting!

Probably changed so much since the original version

Always I think Lutero was a nice and smart man.
He lived difficult times. In this time the catholic church was a mess.
And Im catholic :)

In those days, it was a radical act of opposition to translate the Bible into language that people could understand. The Catholic Church burnt people for it.

So much gets lost or changed thru translating...

2017 will be 'Luther year'. It will be 500 years ago Luther nailed his 95 theses to the door of the church in Wittenberg, which is marked as the start of the Reformation.

The Bibles were written in Latin knowing only well-educated people could read them to keep a hold on political as well as spiritual power.