Fact of the Day: Helvetic Republic 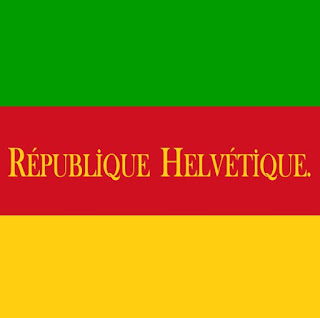 At the very end of the 18th century, France invaded Switzerland to "liberate the people" from a more "feudal" system. They established a country known as the Helvetic Republic which would act as an ally of France. While some Swiss people supported the new regime, others strongly resisted the loss of local democracy, attempts to destroy Catholicism, new taxes, and other reasons that came straight from France. The republic dissolved in about five years becoming the Swiss Confederation though it wouldn't truly leave French influence until years later.
Posted by Adam at 12:00 AM

I've never heard of that.

Never knew that happened at my sea

Never heard about this..)

I always thought Switzerland history was filled with peace and a whole lot of MYOB! Lol

My paternal grandparents emigrated from Switzerland about 90 years ago. I really should read up on Swiss history more than I have.

Seriously. That is news to me!

Have a nice day,
-Kati
http://almoststylish.blogspot.de

I must have the knowledge of Switzerland.

Yeah, I don't know a lot about Switzerland. I don't even know if Swiss cheese really is Swiss or if it's just like 'French Fries.' So good fact. Oh, and can I just say that Helvetic Republic sounds like a very fancy font.

I didn't know any of this. Very interesting.

Hmmnn... France is a staunchly Catholic country so I would have thought they'd support Swiss Catholicism.

French Revolutionaries that rose to power were not Catholic.

I don't think we studied this in school...very interesting...

hahha...I always get a kick out of your comments...and now I am wondering if Swiss cheese is really Swiss...