Fact of the Day: James V of Scotland 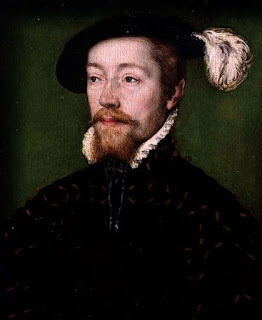 James V of Scotland was a grandson of Henry VII (and nephew of King Henry VIII) but despite the English royalty in his DNA, his country of Scotland was at war with England. He died of an illness in times of much tension, only leaving behind an heir (Mary I) who was six days old by the time he died.
Posted by Adam at 12:00 AM

Email ThisBlogThis!Share to TwitterShare to FacebookShare to Pinterest
Labels: fact of the day, politics, Scotland

I've always found European history so fascinating, but too many monarchies! :P

Had a rough go of it by the sounds of it

Joy of the fashion. said...

The daughter is Mary Queen of Scots, who didn't fare too well thanks to her cousin Elizabeth.