Fact of the Day: Patton Anger 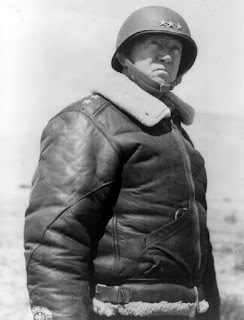 While George S. Patton was a famous general during World War II, he was no stranger to self-caused controversy. One of his issues was that he didn't believe in PTSD and would think that soldiers were just cowards. After getting violent with soldiers (including one suffering from malaria) he was relieved of command by General Dwight D. Eisenhower but eventually got his role back.
Posted by Adam at 1:26 AM

Email ThisBlogThis!Share to TwitterShare to FacebookShare to Pinterest
Labels: Dwight Eisenhower, fact of the day, politics

Thanks for shearing dear

I would have been scared to death to have served under Patton.

Patton's attitude towards PTSD was common in WW2. Many would say it's still common but now just glossed over by political correctness.

That was nice of him to attack someone with malaria, geez.

I remember this playing out in the movie "Patton."

too bad he got his role back.

We used to never hear the words PTSD...
I absolutely LOVED the movie with Geo. C. Scott..and now I want to watch it again....

Have the DVD of Patton - excellent movie, not really true
to the events of the day. Far too much glorification of
George and if memory serves me correcting, G C Scott did
not turn up to accept the Oscar.
He wasn't called "Blood and Guts" for fun.
The depictions of Montgomery, Rommel and Bradley were far better.
And another thing that really got up my nose was the actor who played
Generaloberst Alfred Jodl.
Jodl was of small statue and BALD!
B J Hunnicut aka Colin

Oops.
Should be "serves me correctly" and I just checked G C Scott
DID receive the academy award and let the Oscar Academy that if he won, he wouldn't turn up to accept.
I wonder who accepted for him.
I can well and truly understand why "dj" loved the movie - ha ha.
Colin

I didn't know that about him.