Fact of the Day: Prince Napoleon 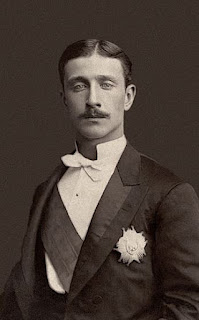 After Napoleon III was ousted from power, his family moved to England. After his death, his son was proclaimed as Napoleon IV by some still loyal to the now-abolished monarchy. He was allowed by the British to fight in the Anglo-Zulu war as he was keen to see battle. A fatal mistake as he was killed in battle. His death meant the end of hope to the restoration of a Bonaparte on the French throne.It was at the time one of the biggest things to shock Europe. Some blamed the British government and even Queen Victoria for his death.
Posted by Adam at 2:00 AM

I didn't know this! Such a shame how many people lose their lives to war.

Can you imagine if he lived and actually restored the Bonaparte name into the throne? Hmmmmm.....

War can sure destroy the best laid plans

Imagine if he lived - history could have looked so different!

I didn't know any of this. Very interesting.

It always amuses me how much the French revere the memory of Napoleon, who was responsible for millions of French deaths.

Isn't that a great photograph too!