Fact of the Day: War on Women 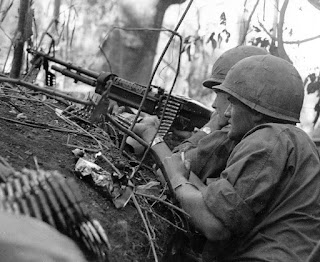 It was only until modern times when women started to get any kind of military roles that put them in some kind of combat or near-combat. While most wars from today back to early history were fought by a vast majority of male soldiers, in some wars (arguably) women had more deaths than men despite not being soldiers. The main reason for this is severe casualty rates for civilians who are often women, children, and the elderly. In the Vietnam War for example, an estimated two million civilians had died from some war-caused reason while (at its highest estimates) 1.9 million soldiers from both sides of the Cold War conflict in Southeast Asia had died.
Posted by Adam at 12:00 AM

Email ThisBlogThis!Share to TwitterShare to FacebookShare to Pinterest
Labels: fact of the day, Vietnam War

People just trying to live and get by die the most, figures.

I know that I personally wouldn't want to join the army anyways - but obviously that's not a guarantee to not be affected by it...

Women are the victims of a lot of rape during wartime too, which is often pursued as a military tactic to subjugate a local population. Only recently has that been acknowledged to be a war crime.

Women have far too often paid the price for wars they were never responsible for causing.