Fact of the Day: Wasilla Politics 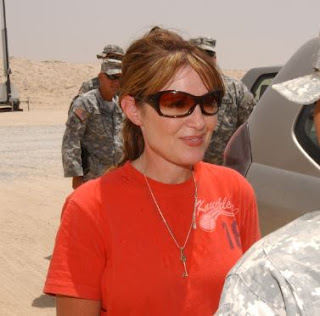 Former 2008 Vice Presidential candidate Sarah Palin is quite well-known for her politics and style which often can be rude and uncivil. While she only ran for federal office once, even her campaign as mayor of the small city of Wasilla in Alaska got ugly. When she became mayor she ousted the incumbent John Stein. Supporters of Palin called her "the future and first Christian mayor of Wasilla" which was untrue as Stein was Lutheran (his surname sounds Jewish) and previous mayors of the town had been Christian. They also attacked his marriage claiming he wasn't really married at all which was also untrue. Reflecting upon the 1990's mayor race, Stein called Palin's allies her very own "liquor cabinet".
Posted by Adam at 12:00 AM

lmao sure sounds like they were quite the forgetful drunks

We've only heard negative things about her here in Finland :( Thank you for stopping by my blog!

Didn't she call herself a pitbull with lipstick? Sounds accurate.

It isn't possible for me to hold Palin in lower regard, along with McCain for picking her as his running mate.

Yes Stephen I agree. McCain and THAT HANOI HILTON CAGE moment of
stupidity which like a nightmare must have come back to haunt him.
Sarah Palin - the darling of the Tea Party mob - the most ignorant and dopiest woman on planet Earth and Trump has her on his campaign trail.
She is a despicable lunatic.
Colin
PS: Leaving out my "nome de plume" - BJ Hunnicut would have fits.

Not the classiest of people...

Her high-pitched voice grates on my nerves....