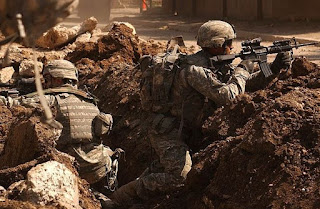 "When you get into trouble 5,000 miles from home, you’ve got to have been looking for it."
-Will Rogers

Will Rogers was a humorist and comedian back in the early 20th century but I think this quote does describe most of the wars in the history of mankind. Why was the Vietnam War and the 2nd War in Iraq so unpopular by the end of the war? Because we had very little reason to be there in the first place. All of Vietnam became communist and America stayed exactly the same decades later. In Iraq we certainly made things worse, not better. Wars are caused by many reasons, either because of riches, racism, religion, or just petty reasons. How many men all over the world since the dawn of civilization died thinking they were heroes for a just cause, but in truth were nothing but the pawns of politicians? Humanity has evolved in many ways in a few hundred years, but we never figured out that maybe war is not always the answer.
Posted by Adam at 6:00 PM

I don't disagree about being pawns of politicians, but that doesn't mean they weren't heroes.

But Adam, countries need wars not only because of politics but as a source of profit for conglomerates, you know? (And yes...I am just being sarcastic....in case someone thinks I'm serious.)

PS Lady Stoneheart in the next episdoe?!?!? Weeeeeee! We get to see her finally!

Vietnam was a disaster from the start to the inglorious sight of helicopter flying off the roof of the US Embassy compound in Saigon.
Read the excellent book - SAIGON - on the subject. Some people just MIGHT learn some facts.
B J Hunnicut aka Colin

Should read HELICOPTERS flying off the roof and who can forget the US military shooting desperate Vietnamese being shot off the landing pods and these people WORKED for the US - the CIA etc.
Yes Susan Cox - were these American military personnel HEROES??
B J Hunnicut aka Colin

War is not always the answer.

Perhaps one day human beings will get past these senseless wars and get along with each other. One can certainly hope!

I remember being part of a sit-in against the war so very long ago.

Old men create wars, and young men die in them.

Worse doesn't even come close, Adam. But war is business so...

there will always be wars....