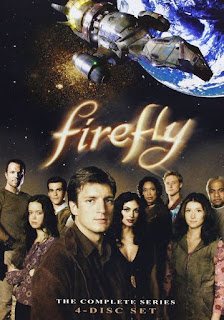 I somewhat remember when Firefly was new on Fox, and I didn't care to watch it. Neither did most of America as the series was cancelled before the final episode though they did make it and it was released later. It became a cult-classic show later with fans hoping with enough new fans that it could be brought back to television. The only show I could think of that did that was Family Guy and even it had to struggle for it. It has some rabid fans, and apparently for good reason. Most of those who had seen the show never speak ill of it. I think one of the reasons I waited about 14 years is because I wasn't quite sure what it was about. After seeing Morena Baccarin in Gotham got me re-interested in Firefly as I heard she had a major role in it too. Now that I've watched it, is Firefly the amazing series that spawned countless fans or was this one over-rated by people who couldn't stand that the story wasn't finished? 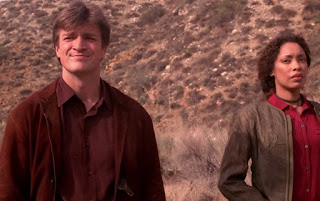 The story takes place in the year 2517 long after Earth had been ruined. Humanity terraformed many different planets and moons to sustain life. The "core" planets called The Alliance (with a government and culture formed from a mixture of America and China) were the most advanced and decided to control all the outer-planets under their rule. An independent movement resisted but lost the war in the long-run. Malcolm Reynolds was such a soldier and now flies a Firefly ship named Serenity with his former comrade Zoe Washburne as his first mate. Her husband Hoban "Wash" Washburne is the ship's pilot, a semi-trustful mercenary named Jayne Cobb is the extra muscle, a chipper girl named Kaylee is the mechanic, and a gorgeous woman named Inara Serra is a companion of sorts for the passengers of Serenity. They take passengers as a bit of a show, as the ship's crew often take missions that would not be deemed "good" by The Alliance but not evil by moral standards. 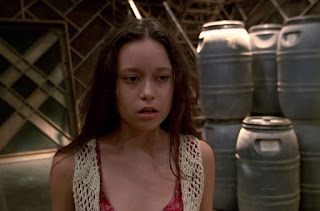 They take new passengers on one day including a Shepard (like a priest) named Derrial Book who often clashes ideologically with the ship's captain at first though there is mutual respect. The others are Dr. Simon Tam and his sister River Tam. Simon Tam is a brilliant genius but his sister River makes him look dumb or at least she did. The Alliance sent her to a special school which ended up being a research laboratory where they practically tortured her. Now she appears to be semi-insane but there is something quite special about her. But the ship's crew, and even her doctor brother Simon are quite sure what. But Captain Malcolm Reynolds decides that are worth protecting and vow to keep them hidden from The Alliance as they want River and her "special powers" back. 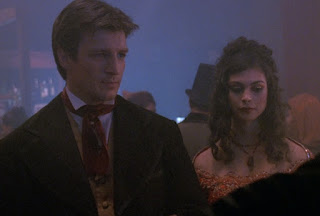 Overall I was a bit disappointed in Firefly. I was expecting to be wowed to another level, but I only liked it. I didn't quite love the show. Some of their missions often just lead them into too much fighting and it's shocking that against all these bad and terrible odds that there are no major deaths by the time the season/series is over. I think if there was a second season we would have seen better stories as they hint at really cool stuff and hold River's talents back for the majority of the show. They made a film called Serenity not long after the show ended in 2005 to help end the story or at least give it another chance. While I wasn't a super-fan of Firefly like a lot of other people, I'll be watching the sequel film Serenity very soon.

I watched it a couple of times, but just couldn't get into it.

I plan to watch this on Netflix eventually. So many wonderful series, so little time!

I love this one!!

Another program that I missed.