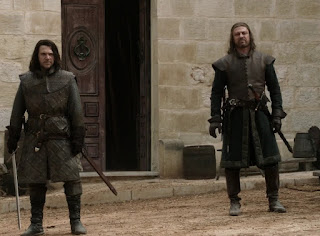 As I've mentioned before, Game of Thrones is my favorite TV show of all time. I finally convinced my mother and her boyfriend Jimmy to watch the series, and I'd ask what happened and explain their questions. One day they mentioned that Ned Stark and Jaime Lannister fought in the streets of King's Landing and that the fight was over when a spear went through his leg. But my mother mentioned that "it's obvious he won't die, because if he did then the story would be over". While Lord Eddard Stark survived his wounds from the battle, his doom followed not long afterwards. 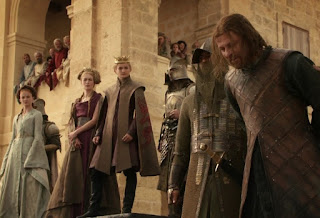 His fate fell in the hands of Jaime Lannister's biological son (with his sister Cersei) Joffrey who had Eddard murdered after he challenged his right to the throne in favor of King Robert's brother Stannis Baratheon. And yet the story didn't end, it just got much bigger and better. One of the reasons why I think Game of Thrones is so compelling is that nobody is safe. Which makes me worry for most of the Starks (especially Jon Snow and his direwolf Ghost) tonight in the Battle of the Bastards. I'm really sure Ramsay Bolton will lose, but it wouldn't be the first curve-ball the TV show/book series has given fans.
Posted by Adam at 12:00 PM

Email ThisBlogThis!Share to TwitterShare to FacebookShare to Pinterest
Labels: game of thrones, story

"The Battle of the Bastards" -- what a great title for an episode! EVERYONE'S cheering for Jon Snow but that's no guarantee of success in Game of Thrones, as you've noted.

I must admit that I was shocked at what happened to Ned Stark. But it didn't take my husband and I long to realize that nobody is safe on this show, so it's best not to get attached to anybody. Now we're caught up and we look forward to each new episode every week like everybody else. I love the title of tonight's episode. So perfect. And I've seen the previews. I'd LOVE for Ramsay Bolton to get his ass kicked in by Jon Snow but I'm not betting on it. This show throws curve balls and the people that you want to die live and the people you want to live die. I'm very worried about Ghost, though. Whenever those animals die, that's when I'm the most upset!

It's true that at any moment a major character, or his entire wedding party, can be wiped out. If the Mother of Dragons gets bumped off I'm out of there.

Never thought he'd get killed off when I started. After that I knew no one was safe.