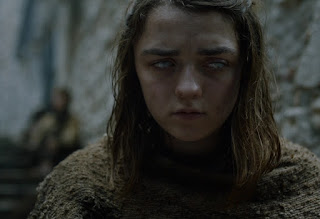 I personally think Game of Thrones is the finest show on television. Based on the book series A Song of Ice and Fire the show has wowed fans time and time again across the world. By the time season five was over pretty much the entire book series had been covered except a few major and minor things missing from A Feast For Crows and A Dance With Dragons. Author George R.R. Martin had been slow writing Winds of Winter, so the show now had to reveal things that book readers never got to know first. Last season ended rather bleakly. Daenerys lost control of Meereen, Stannis Baratheon was crushed by the forces of House Bolton, Arya Stark went blind, Margaery Tyrell slept in the cells, Sansa Stark was forced to marry Ramsay Bolton, and Lord Commander Jon Snow was fatally stabbed by men of the Night's Watch at the Mutiny at Castle Black. Will things finally look brighter for those of and loyal to House Stark? 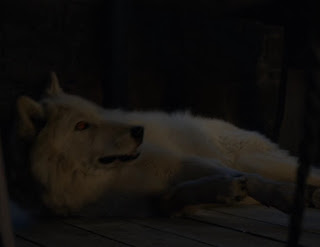 At Castle Black, the death of Lord Commander Jon Snow had not gone unnoticed. His loyal dire-wolf ghost is the first to realize that something horrible happened to his master. Alliser Throne has taken command, and attempts to crush anyone still loyal to the now-dead Lord Commander such as Davos Seaworth, Lady Melisandre, Eddison Tollett, and many others. North of the wall, the free-folk have all fled under the protection of Lord Commander Jon Snow whom they don't realize can no longer help them. The only people north of the wall are Bran Stark, the Three-Eyed Raven, Meera Reed, and Hodor. The old green-seer trains young Brandon Stark to take his place. But with the White Walkers growing stronger each day will that ever happen? Sansa Stark and Theon Greyjoy fled Winterfell and now try to escape once and for all from Ramsay Bolton who wants his Reek back and his "beloved" red-haired wife. 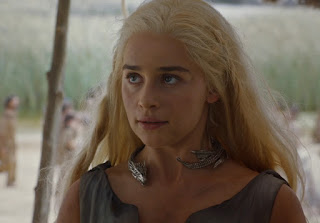 Queen Daenerys Stormborn of the House Targaryen has found herself in quite the pickle. Her fearsome dragon Drogon became injured (but still alive) and she fell right into being a helpless captive for the Dothraki under the command of Khal Moro. They care nothing for her ranks, lands, or titles, but rather her time as Khaleesi. But Jorah Mormont and Daario Naharis go out to find her and hope to rescue her from the savages. Meereen is in a stable chaos as Tyrion Lannister attempts to bring peace to the city. But if Queen Daenerys Targaryen returns will she like the leadership of the city under the imp? In Braavos the young Arya Stark has gone blind after disobeying the Faceless Men of the House of Black and White. Jaqen H'ghar has decided to give the young Lady Stark another chance to become "no one".But is the noble lady ready to leave her house behind and serve the deity known as the Many-Faced God. 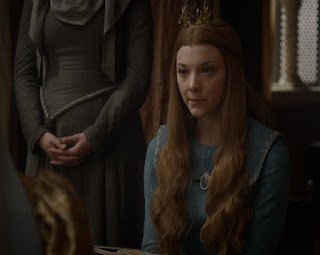 In King's Landing the High Sparrow and his religious fanatics has taken the city under their control. Queen Margaery and her brother Ser Loras Tyrell are still held captive for their "crimes" against the Faith of the Seven. Their imprisonments greatly angers House Tyrell and while Cersei could care less about them, her brother Jaime feels compelled to confront the Sparrows even if it means war. In Dorne Ellaria Sand and her Sand Snakes make a bold move that will shake the politics of Westeros. House Frey loses control of Riverrun when Brynden "Blackfish" Tully takes the castle back. Which leaves Walder Frey furious, and his sons nor his forces seems to be capable of getting through the castle walls. So they are compelled to ask for help from the Lannisters who made a deal with them (mainly Tywin Lannister) during the War of the Five Kings. 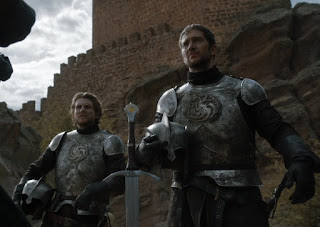 The sixth season of Game of Thrones was one of the things I looked forward to most all year and last year. I would dream of what would happen and a lot of my predictions came true. Other fans guessed pretty well and while there are a few shockers, fans have gotten pretty smart to George R.R. Martin's clues. Does R+L=J? Does Jon Snow live? Will Lady Stoneheart return? Who is Coldhands? What does Hodor mean? and many others were big questions/theories that fans mostly got right though a few of these questions had theories that were proven wrong. Like the other seasons, there's things you don't like that will happen, as often of our many favorite characters die or the show does something that books probably don't. But I can say that every Sunday this was the reason I got up on the morning. I did feel that parts of the story moved too slow, but I still think it's the best show on television by far. Now we have to wait another ten months or so for season seven or perhaps know something the sixth season didn't cover if and only if George R.R. Martin actually gets finished with the Winds of Winter.

Everyone I know who watches it loves it. I never read the books, and I tried watching the show, but it was just too gory for me. Although I don't know if all the episodes are like the one I saw.

Many of our friends recommend GOT, but we still haven't made time to try it. I think I'd like to try the books first.

I honestly feel like this season is my fave to date. Aaaaaaaaaah! After last Sunday's epic episode, I was a bit worried that last night's would be a bit slow, but oh...my....gosh! Cersei....oh Cersie....she has the true spirit of the Lannister lion. I was so shocked by her plan! Gaaaaaaah! Poor Tommen, but he was never a strong character. And OMG! Jon Snow! Jon Snow! The theory about him was right. The true king! (Sorry for all the exclamations. I am just really excited:D)

Thanks for this run down.
Lisa

Thanks for this run down.
Lisa

I have the books but just haven't gotten around to reading them yet. I'd like to read them before I watch it.

We watched the current season finale last night and it was awesome.

My husband and I have thoroughly enjoyed this show. We haven't watched yesterday's episode yet; we'll be doing that tonight. It's sad that it'll be a long time before another episode comes along. It's a very addictive show.