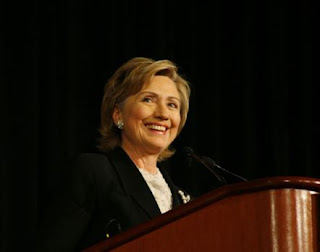 After winning the Democratic primary in California, Hillary Clinton has made it almost mathematically impossible for Bernie Sanders to take the nomination away from her even if you take away the super-delegates. So yes, 2016 will be Hillary Clinton vs. Donald Trump along as there isn't a contested convention at either party's camp. While I supported Bernie Sanders, I do support Clinton in the general election as a Donald Trump presidency is something that the country does not need. If Clinton and Democratic leadership are smart and not bitter with pride, they'll at least offer Bernie Sanders the chance to be her running-mate as it's really the only way I can see the party unified. If Sanders supporters become too bitter by not showing up (or worse deeply and ironically voting for Trump) to the voting booth then Donald Trump does have a chance to be president.
Posted by Adam at 11:10 AM

Oh man, I so hoped it could be Sanders!

I look forward to yet again not voting this year. Like South Park once joked, Giant Douche vs. Turd Sandwich. Nothing ever changes.

I hope Clinton can prevail.

I don't know if Bernie Sanders would even accept an offer to be her running mate.

I'm curious to see how this plays out!

Anyone is preferable to Donald Trump, except Ted Cruz.

Hilary hopefully wins or my faith in the USA will drop off the radar.
As for Bernie as running mate, he has Capital Hill experience,
but his age would be a problem.
The very idea of that clown ( buffoon ) Trump in the White House
and the USA may find itself friendless in the World.
I cannot understand how the Republican Party has allowed this situation to have come about. Incredulous beyond comprehension.
B J Hunnicut aka Colin

Well then you, young fella, are a coward, so never complain
about your political leaders EVER again. You have denounced your
rights of a political viewpoint.
Colin

The last time I looked, we all have the right to OUR OWN OPINION....

No comment on the subject...
but a HELLO to you, Adam...have a good rest of the week.