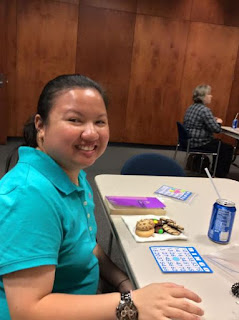 On the last day of my vacation, the local library had its last bingo game until autumn. Daisy was excited to say the least. We had a lady at our table who would not shut up and would ramble on and on especially when they called number 13 and the day was the 13th. So that day was her "lucky day" and she let the whole room know several times. She did win a game and then left a little while afterwards. While it's unlikely to get bingo twice in a day, they'll still let you try. I was not sad to see her leave though. 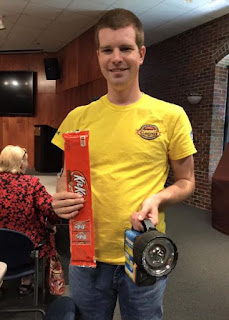 But guess who got bingo on the first game? Yours truly. The prizes are lame and I honestly just like winning any contest especially ones based on skill. They let you pick two things off the table so I got some kit-kats and a big giant flash-light. I had to go to the dentist aftewards so Daisy and I drove separate cars. The summer heat melted them a little so I had to put them in the freezer and then the refrigerator after I got back.
Posted by Adam at 5:00 PM

Heehee...congrats on the win. A win is a win, no matter what the price is:D

Congrats! I'd love to win both of those prizes!

Congrats! It's always fun to win even if the prizes are a little lame.

I don't think those prizes are lame at all. Kit Kats are de-lish and the big flashlight will come in handy now that you are a homeowner.

Congrats and enjoy the kit kats!!

Congrats ! This Kit Kat is stunning ! :)