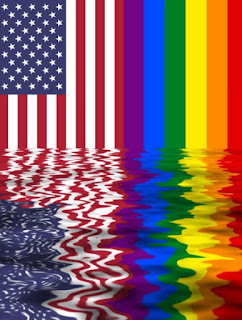 As I'm sure a lot of you heard by now but there was a mass shooting at a Florida nightclub by Omar Marteen who many are calling a terrorist (his father says he was just homophobic) and 50 people are now dead and about 50 more are wounded. This does make me upset that we continue to let tragedies like this happen in the United States. They do not happen in other countries that have enacted common-sense gun laws that keep them out of the hands of people who don't deserve to have them. It's scary that the gun-lobby has convinced their Republican puppets to let anyone have a gun. Doesn't matter if they're crazy, if they're a criminal, or if they're an extremist, that's how our Congress and state governments have betrayed us. The conservative right-wing says guns make us safer? How can you argue against the tragedies this country has suffered? Why are all these pro-life people apparently not pro-life once we leave the womb?
Posted by Adam at 12:34 PM

Yeah it's pretty bad. And another guy was just arrested heading off to a gay pride parade. He has a bunch of guns on him. I can't even imagine what he was going to do.

Certainly getting wide TV coverage here.
This tragedy is the 29th "major" one in the time
of the Presidency of President B.Obama. As the TV
commentators here have pointed out, you can see the strain
and ageing on the face of the President. He has done everything
possible to limit this madness of the gun laws of the USA.
Bloody well amend that part of the Constitution - it is not 1776
today. Then yes guns may have been needed by households in case
the British came back, the French and the Spaniards came north and of course Alaska was then part of Tsarist Russia. Hawaii was a Kingdom
and other now represented dependencies of the USA - American Samoa,
Guam etc. were unknowns, have representatives on Capital Hill.
Grow up America - I dread to think what that lunatic Trump will come out with !!!! Plus the utterings of that looney, Sarah "Tea Party" Palin.

The only people who should be licenced to have firearms are farmers
to protect their stock/livelihood from predators and feral animals and they certainly DON'T require AK47 or machine guns for that purpose.
When will the USA come to its senses???
B J Hunnicut aka Colin

This is all over the news. Such a horrible tragedy.

Sad indeed. Even more so as it could be avoided if people stop living in the past and that whole "right to bear arms" for everyone crap is tossed out the window.

Gun culture is alive and well. You can take the guns away but you still have the demented culture that if there's something you don't like just blow it away. It's a very tragic time for all those who've lost friends and loved ones.

You make an excellent point, one I can't disagree with.