Question: Will Lady Stoneheart Appear on Game of Thrones? 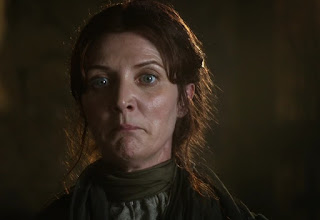 This is obviously just for Game of Thrones fans caught up with the latest episodes. The biggest rumor is that Lady Stoneheart will appear this season. In the books, the character is the revived Catelyn Stark (Tully) who was brought back to life by the ways of the Lord of Light by Beric Dondarrion. Unlike Beric and Jon Snow, Catelyn was days dead in a river when she was revived. When she awoke, she was not the same person. She was almost like a zombie, she couldn't really talk, and was utterly vengeful to seek justice on those who murdered her son King Robb Stark (and herself) at the Red Wedding. 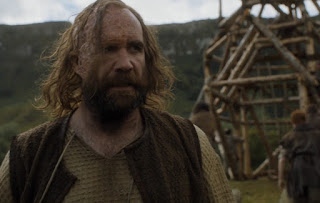 Resurrection is a common theme lately as we saw with Benjen Stark as Coldhands and the return of a "peaceful" Hound whose real name is Sandor Clegane. Jon Snow was already revived awhile back after the mutiny at Castle Black. The Mountain was turned into a super zombie (in the books known as Robert Strong) as Cersei's puppet. The show has been different from the books in many ways, but could she come back or is she gone forever? 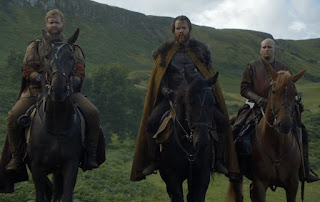 I think it's probably likely she'll come back as the Riverlands have become a important scene again. We just recently saw the Brotherhood without Banners return but they're quite different. Before they were like Robin Hood, hated by the crown but beloved by the common people. But they've changed into more sinister soldiers. In the books Lady Stoneheart takes command of the Brotherhood and causes many of its members to leave because they no longer protect but rather spark revenge on friends of the Lannisters and the Freys. She was one of the coolest characters from the books so I really do hope we get to see Lady Stoneheart in the show.

What do you think? Is Lady Stark gone for good?
Posted by Adam at 12:00 PM

I don't think "Lady Stark" has returned. What was once Lady Stark is Lady Stoneheart, but the essence of Catelyn is gone.
Just gettin' my nerd on.

There's just so much going on it's hard keeping everything straight.

My husband and I started watching this show not too long ago and we love it. We've also caught up, which is great. I think she may very well come back but whatever defined her as Catelyn will no longer be there. It'll just be a shell of her.

Let me just say how happy I am to see the Hound back. That was such a sad ending though (as usual):'( And yes please! I want Catelyn Stark back, even as a zombie! I know Ned Stark is dead and gone, but deep down, I'm still hoping someone sews his head back on, and then he hooks up again with Lady Stoneheart and rule the 7 kingdoms....just saying....:D

UUUGHHHH!! I miss this show. Took HBO out. Im so far behind now.
Lisa