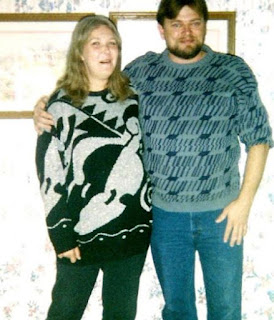 Unlike the kids of today's generation, I remember having just a home phone and being able to pick it up no matter who called. One time my Aunt Denise called and she wanted to talk to my mom. I gave the phone to my mother, and a little later my mother tells me something. Denise said I had "horrible phone manners" but since I wasn't even a teenager at the time, why expect it? I wasn't rude and it puzzled me for awhile. Then years later Denise's crazy side (I literally mean that) started to become very obvious and she managed to alienate the vast majority of her family members. Then I realized, I had phone manners, she was just insane.
Posted by Adam at 12:00 PM

Ha, good one. Have a great weekend!

I remember home phones. My relatives still have them.

I'm old enough to remember "party lines," when you'd pick up the phone and someone was having a conversation with someone else.

Well, that makes perfect sense to me. Just mind your blogging manners.

Were you eating something when you answered the phone? That was a big no-no in telephone etiquette, as I recall.

There's one in every family.

I don't know what I would do with a home phone.

I do know I have terrible phone manners. Your Aunt Denise would hate me:

M<e: Yeah, what's up?
Caller: Well, I just left a 5 minute message explaining in great detail...
Me: Yeah, I didn't listen to it. Just saw you called. What's up?

This is really sad. Sounds like she was rather paranoid/schizophrenic. She probably was highly sensitive and overly suspicious, thinking you might not like her. I hope she got some help.