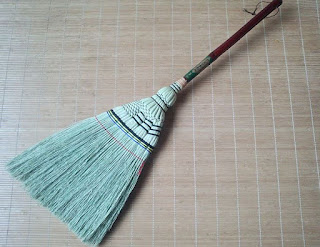 When I was very young we had a dog named Trixie (and then we later had a dog of the same name because someone at the house was unoriginal) who had previous owners before we got her. Dogs can't talk but they leave clues about their past. My mother told me whenever she held a broom to sweep, Trixie would cower in fear. Making it obvious that it was the tool that the previous people who had Trixie used it to abuse her with. Trixie also passed away herself a year or two after we got her. I don't remember the cause, probably something like heart-worms or some kind of other parasites. My parents were never keen on taking them to the vet. When it came to medical care, the poor dogs were on their own.
Posted by Adam at 12:00 PM

oooh. poor Trixie. I love dogs, and if I could I would rescue every single one. I think dogs are the most loyal and loving friends you could have, and i don't know how can someone hurt a cute little god. it breaks my heart.

Oh dang, that's so sad. The dog we have now, Falcor we got from our apartment manager right before she left. This poor dog was in his dog run 24/7 for the 6 months she had him and Ken asked her if he could take the dog. She was more than happy to give him to us. He still cowers if someone raises their voice and he still gets scared if we move too fast.

that is sad about the broom

Well, at least Trixie had a few good years with you.

Animals have very good memories. So if hit with a broom when
a puppy then the poor dog when it sees a broom is scared "shitless"
for ever after.
If you have a pet - dog, cat or a bird - remember that they cost money and if showing symptoms of illness or injury MUST be taken to
a vet, otherwise the owner should never have had a pet. They are
cruel people.
Colin

I know animals can be expensive when sick...gotta consider this before getting a pet.

That is very sad about the broom.