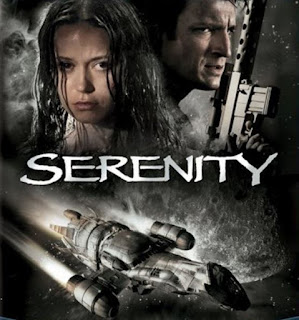 I just recently finished the TV series Firefly which had originally been cancelled before the first season finished. It had a loyal following in the next few years afterwards and had enough support for them to make a movie that served as a sequel to the story. While I didn't like Firefly as much as other people did, I was curious to see how good or bad the movie Serenity (named after their Firefly-class ship) was. I figured I would like the movie more than the TV show as they could be more violent with it, and there would be no story-lines that would serve as filler until something more exciting happens near the end. 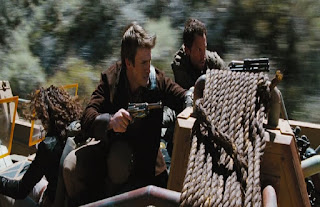 Serenity doesn't take place long after the events of Firefly's only season. Nothing has changed much except for Shepard Book leaving to settle on a peaceful planet and Inara Serra moving on from Malcom Reynolds who could never get the courage or motivation to tell her how much he loves her. Knowing that River Tam is really psychic, they use her and her powers on a mission to the anger of her brother Dr. Simon Tam. All goes fairly smooth until River Tam senses that the dreaded Reavers are nearby. They totally destroy the town they're at, and almost murder Captain Malcom Reynolds and the crew of Serenity before they escape into outer-space. 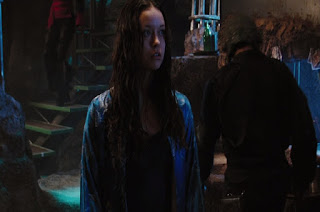 River Tam does seem to be the semi-stable person she always was and has been. She ends up going berserk which was triggered by The Alliance in hopes of finding her. The Alliance sends The Operative who is a black ops agent tasked with finding and perhaps murdering River Tam as she is too powerful and knows too much. Like always (despite the annoyances she causes) she is ultimately protected by Captain Malcolm Reynolds and the crew of Serenity. But they'll soon find out why The Alliance is so crazy about getting her back, and it it's something that can affect every single person who lives in the little universe The Alliance controls and rules with a iron fist. 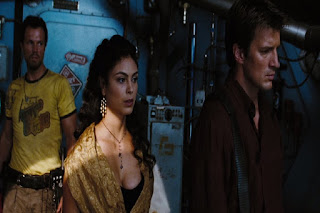 Overall I liked Firefly more as a movie than I did the TV show. Near the end you already figure that the show/movie creators knew this would most likely be their last part of the story. Though they leave it open to the possibility but I"d be very shocked to see the Firefly series return to TV or come back to the silver screen. It wasn't that successful as the box office, so I'm not shocked a sequel never happened. But it certainly was a very good way to appease fans upset of the show's cancellation. I liked how they focused more on River this time, and showed how brutal Reavers could be as they never truly showed up on the TV show just strongly hinted at.

I haven't heard of this movie before. I did see Firefly on my Amazon or Netflix, but never did add it to my queue.

I liked firefly and the movie.

This is the first I've heard of this.

The others do a good job gushing about the movie. Sure we're fans and bound to like the movie more than the usual fare, but those looking for an original and thrilling movie experience, this will shock and amaze. The Firefly world introduced a fantasy home for many of us, with characters we truly cared about and dilemmas we could get behind. The best way to describe it is to take the best aspects of the Han Solo elements of the original Star Wars, and build a world around that. > Reviews Serenity 2005
There's no grand theme or clear cut good and evil. There's just a band of fugitives trying to make their way in a dangerous sky. It's something folks can relate to, although most of us won't be in a space battle or fighting psychotic creatures anytime soon. The point of the name Serenity is the name of the ship, though in a deeper sense that's what our characters are in search of. Finding freedom and a home, and that's what the ship represents to them, and to the fans. So you understand why so many are so excited about this dinky little scifi flick.