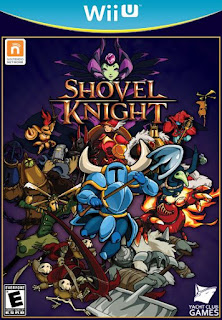 Since I was still on vacation, I decided to see what video games were out at my local library which has a small collection of them. The only WiiU game I was remotely interested in was Shovel Knight which I had never heard of. I took a quick look about it and the reviews seemed to be positive. It was made back in 2014 for Windows, 3DS, and the WiiU. Shortly afterwards they made versions for PS3, PSVita, PS4, Xbox One, Linux, and Mac. They actually made this one retro on purpose and I was surprised to see this not end up on the digital-only games like WiiWare, PSN and Xbox Live Arcade. If you didn't know it was a recent game, you'd think it was made either for the NES or the Sega Master System back in the late 1980's or the early 1990's. 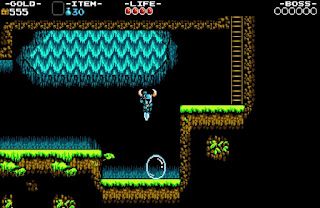 I was a bit curious to see what Shovel Knight was similar to and I always thought MegaMan was the closest thing to Shovel Knight. But it also feels bit like Super Mario Bros in a way as well. But I wouldn't doubt MegaMan served as its biggest inspiration. There's also RPG elements similar to the Zelda series where you can upgrade your health, magic, and get better armor and weapons as the game goes on depending on your success in the other levels. But you go across a huge map where you must complete stages that are all different but typically will have a boss battle at the very end of them. 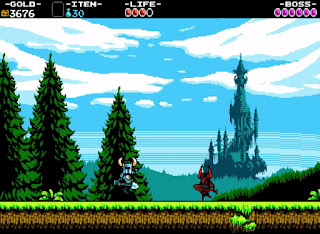 While the boss battles are usually as epic as MegaMan's, the game relies heavily on tough platforming (like Mario) to get to that boss. Unlike many games from the 8-bit era, there's a checkpoint system that's very forgiving even if the level is not. Dying is a common thing in Shovel Knight which makes you go through each section piece by piece like trial and error. There's also a story to Shovel Knight where the hero is trying to save his maiden (who's a warrior too) and is met against a large team of evil knights and other monsters. The story does fell silly on purpose and I usually just ignored most of it. 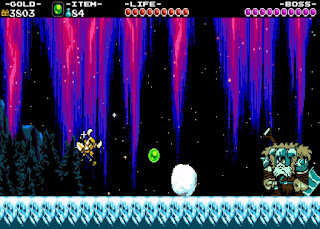 To be honest I was a bit disappointed by Shovel Knight on WiiU. One of the reasons why older games were so brutal is because they didn't want people finishing them in less than a week. It only took me about two days to get through the majority of Shovel Knight. I liked most of the game until the very end where it was more pain than fun and I started to get headaches. Though it's certainly an easier game than the old MegaMans for NES as I could never beat their final levels. Though I did appreciate the novel idea of an 8-bit game for a generation of consoles that had long since forgotten the classic 2D games in favor of 3D ones.