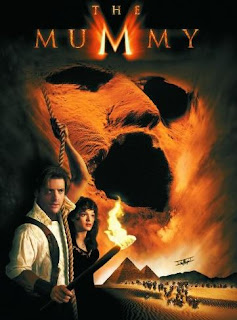 The Mummy was a movie I barely remember in 1999 mainly because I was 11 at the time. I do remember the animated series which came out 2001. I also realized that you rarely see Brendan Fraser in anything anymore. He was the star of the Mummy movies, and I hear there is a reboot (not a sequel) of The Mummy next year. I also learned that isn't the first real Mummy either as this is considered a reboot of the classic movie The Mummy from 1932. Though the mortal human's names are different, the plot is certainly very similar to the very first film to ever have an undead mummy who doesn't like being woken up. 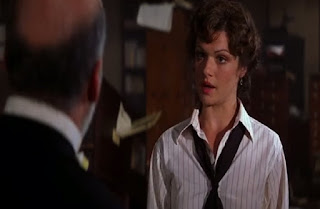 The film is set in the 1920's except at the start in the year 1290 BC. The priest Imhotep is caught by Pharaoh Seti I having an affair with the Pharaoh's mistress Anck-Su-Namun. The two lovers murder their monarch but she stays and sacrifices herself to be resurrected later. Imhotep almost does so before being stopped by guards and being sent into a immortal prison. Many many years later Eveyln Carnahan gets a clue about finding something huge in Egypt. Except nobody takes her very seriously at all. Especially her boss  Dr. Terrance Bay who tries to belittle her ideas as just pure imagination and hope. But she stays optimistic and goes on a quest to not only prove she's right but to make a legend for her name. Except she gets caught up with a bunch of people who really are nothing more than treasure hunters. 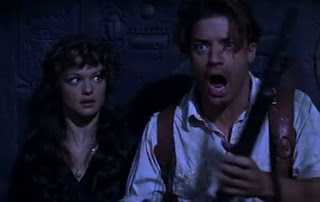 She ends up saving the life of Rick O'Connell who had seen the site where she desperately wants to explore. Owing her a life debt, he agrees to take her there even though it didn't work out so well the first time. They meet a rival team with far greater numbers but with far less IQ points. Idiotic moves from both sides ends up awakening a great mummy named Imhotep. And he's happy to be back to the world, but not so kind to those who freed him from his slumber. Except Eveyln who he believes looks so much like his beloved Anck-Su-Namun. The Mummy Imhotep is immortal and can't be killed by mortal weapons. So it seems that they'll have to pull a miracle off to send him back to the land of the dead. 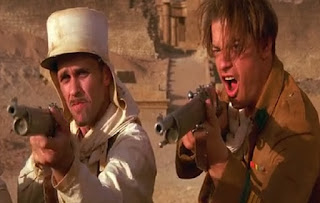 I liked The Mummy but not as much as I had expected. It's often too silly at times, and a lot of the characters can be annoying. I also thought The Mummy could have killed Rick a million times but never seems to be able to do it, which makes no sense to me really. I however really liked Rachel Weisz as Evelyn (even if she doesn't look half-Egyptian like her character), and I hope she's just as good in the sequel. I will probably see The Mummy Returns soon, so I hope it fixes the many flaws of the original. Though to be fair it's not a bad movie, it's still very likable almost 2 decades later. I'll be curious to see how the new reboot next year will compare to this one.

I've seen this one and didn't care for it but I didn't like most of the mummy movies.

I always liked Brendan Fraser and miss him in movies too.

I actually used to like this movie a lot. I used to be obsessed with Egypt, and mummys and archaeology! but yeah I have to agree Brendan Fraser for me means mummy movie!

I think I fell asleep on this one!

An accurate review, in my opinion. I'd also give it a "B."

Being the olden age that I am, I grew up with the original movie series of THE MUMMY and every single one of them scared the fire out of me...I LOVE scary movies....