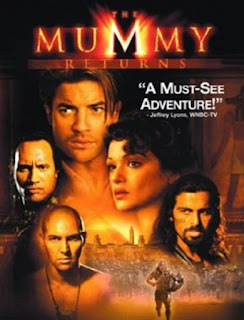 The Mummy Returns is the first sequel to the most modern Mummy film series until next year when the new series starts with Tom Cruise, Annabelle Wallis, and Sofia Boutella. I just watched the original Mummy movie recently and I liked it a good bit. The Mummy wasn't the greatest movie ever, but a decent adventure. I'd figure I'd see the sequel soon enough, and less than a month later here I am.The title basically gives you the obvious premise of what the sequel is about. The dreaded villain Imhotep will return, and it's rather obvious the O'Connells are not going to be too happy about that nor will The Mummy be happy to see them. The other bad guy is The Scorpion King who is played by Dwayne "The Rock" Johnson who was actually better known for being a wrestler for the WWF (now the WWE) back then than he was an actor though times did change for The Rock. 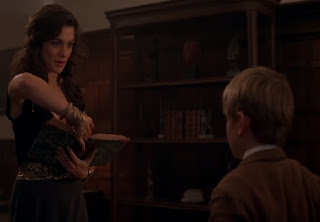 The movie is set nine years after the events of the original The Mummy. The beautiful Evelyn Carnahan is now a mommy as she married the heroic Rick O'Connell and they had a son named Alex O'Connell. While in Egypt they find the Bracelet of Anubis which had belonged to a legendary monarch known as The Scorpion King. He was a mighty warrior who wanted to conquer the world. He was beaten by his enemies but given a second chance for glory by the gods as they gave him an unstoppable army of undead warriors. However one his wars were over, his soul was taken by the very gods that helped him. The bracelet locks to Alex's wrist and shows him visions. The Scorpion King will return and Alex has about a week to reach a pyramid or die when the magic tells him that time is up. 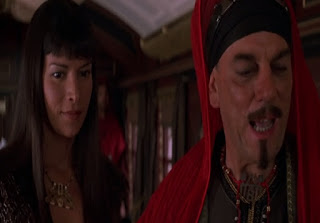 The only way the Scorpion King will die is by something out of this world. An Egyptian cult believes Imhotep is the only being able to defeat the Scorpion King. They go to great lengths and sacrifices to bring Imhotep back to life and with all his former magic powers in-tact. With them is Meela Nais who is the reincarnation of Anck-Su-Namun who was Imhotep's love-interest when he was a mortal high-priest. He failed to bring her back to the dead last time, but ironically it's her who brings him back to the Earth. Imhotep believes that she is truly not the same soul and will need to murder Eveyln O'Connell to fulfill the spell of bringing her former self back from the after-life. Then together they'll defeat the Scorpion King and take his un-dead army and conquer the whole world. But the O'Connells and their allies will be there to stop them, or at least try until the last man is standing at the end of the battle. 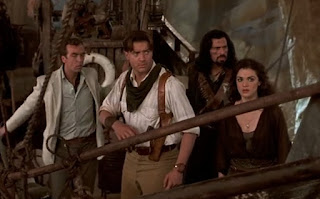 I will say The Mummy Returns is in ways better and in ways worse than it's predecessor film The Mummy. I think Rick O'Connell was better as a dad than some guy that's goofy and has a large amount of luck. I still liked Rachel Weisz a lot as Evelyn, but their son Alex was kind of annoying but still a decent character. It's a little more silly than the original though. I was also disappointed to see the Scorpion King return from the dead as some mute monster with a strength of a titan but apparently can't stop mere mortals by the time it's all said and done. I did really like the scenes from the ancient past involving Imhotep, Anck-Su-Namun and their enemy who is an Egyptian princess named Nefertiti,  There was a third Mummy made, but I doubt if I'll see it soon, but that might be alright. I hear it's far worse than the other two films and Rachel Weisz isn't even in it though Brendan Fraser did return.

True a decent adventure. Did enjoy!

I remember this one. We watched in high school history class. I enjoyed it!

I actually really like the whole Mummy series, but yeah...that kid was not the best. And the third one is not the greatest. First of all, the son on the third movie looks about the same age as Brendan Fraser!

I remember it, well... as usual I go for the first movie of "The Mummy" series. I'm not a fan of sequels :D

Was a pretty good sequel, 3 is okay at best.

Not as good as the original.

I have never seen The Mummy, but it is my favorite ride at Universal Studios!

I love this movie but the first The Mummy is the best ! :)