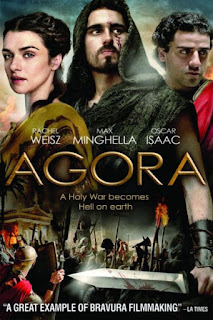 I think I noticed Agora for the first time earlier this year. I can't believe I never heard of it until lately but that's mainly because it never was really in more than a handful of theaters in the United States. It was produced by Spaniards which most likely led it to become one of the biggest hits in Spain for that year. But funny enough, the movie is all in English for the most part. And it's not even set in Spain either. But rather in a Roman-ruled Egypt in a time where Christianity starts to become the major world religion as it became the state religion of the Romans. I knew the story was based on the life of Hypatia of Alexandria who was a woman almost 2,000 years ahead of her time. I also enjoyed Rachel Weisz in The Mummy films so I figured this one would be good. I also get a little worried about "history" movies but records from that time were iffy at best (like nobody is really sure how old Hypatia lived to be) so it's hard for many to say what is true and what's not. 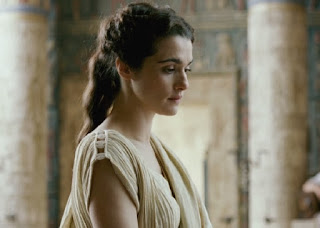 The plot begins with Hypatia already a teacher of sorts in an ancient Alexandria, Egypt. Women's rights will be laughable for countless years afterwards but despite the conservative times this woman is a respected teacher and philosopher. A man named Orestes offers his hand in marriage to her, and most women would never turn such a groom down but she does. As Hypatia thinks that becoming a wife would be meaningless, as life as a genius scholar is far more important than being a "lady" to some important man and mother to his children. She's very prolific in her work, and is always thinking of a new mystery to solve. But while life never changes much for her, it's changing a lot around the world. The Greek-Roman gods were once the main religion of both Greece and Rome but now fall out of favor for those who follow Jesus Christ. So there is a great tension between Christians and Pagans in the city of Alexandria. 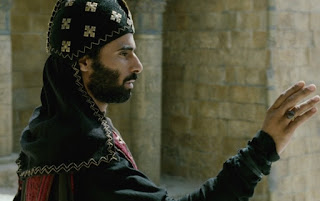 Things get rough for both Christians and pagans as both sides will not back down in their hatred for one another. Orestes becomes the political leader of Alexandria, and he had converted from paganism to Christianity in a few years time.  But despite losing his faith in the old gods, he never lost faith in the pagan Hypatia. A man named Cyril becomes the ruler of most Christians in Alexandria and lets them do whatever they want to the city when it comes down to spitting on the paganism of many of their own citizens. But despite the religious debate, there is a great struggle for power. Cyril wants to undermine Orestes and takes his place as the literal ruler of Alexandria. Using his popularity with Christians to decrease the popularity of Orestes and Hypatia. Things get really serious when Cyril and his people accuse Hypatia of crimes that don't even exist like being a witch. Will law and order and common-sense reason win out over blind faith? 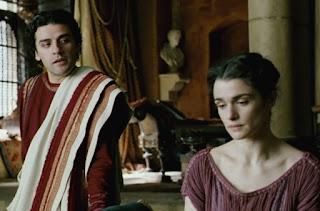 I was actually a good bit disappointed over Agora. Hypatia's sad story is very interesting, but the movie is rather...boring. Perhaps I already knew what was going to happen because she was an actual person from history. Or maybe it's because you never really care for anyone except Hypatia for the most part. This movie apparently sparked some ire form right-wing Christians who didn't like how Christians were being portrayed in the movie. The Christian Church (like anything else) has had a dark history at times and this point in Alexandria was never quite a noble time to be a Christian. But if you look into the movie both Christians and pagans commit the same acts of evil for the most part. Cyril later became a saint still honored by many churches today even though he was more or less guilty for horrible things.

I saw this movie quite a awhile back and I rate it about the same as you do. The story was very interesting but I don't think the movie did it much justice. And the only person I also truly cared about was Hypatia. Also, history is full of very dark periods and we shouldn't just ignore it or pretend it didn't happen. It happened, we should acknowledge it and we should learn from it.

Never seen this! I love your movie recs though! I just watched a weird one called Hard Candy on Amazon Prime. It's crazy! Also check out Life on Netflix. It's about the Life photographer that photographed James Dean.