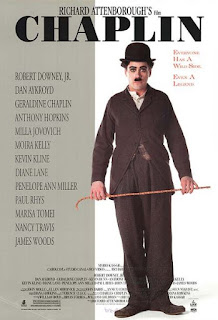 I had only heard of the movie Chaplin until just a week or two ago. It's pretty obvious it's based on the life of Charlie Chaplin, the legendary actor from the early days of cinema. I also saw that Robert Downey Jr. was in the lead role as Charles Spencer Chaplin himself. I'm always skeptical of Americans taking on English accents (Charlie Chaplin was English) but Robert Downey Jr. is a marvelous actor and he's now about as famous as Chaplin was in his day. He is Charlie Chaplin when it comes to people who like super-hero movies with his portrayal of Tony Stark/Iron Man. There are few people living who remember Chaplin in his prime, so while I respect him a lot I can honestly say that I've never really seen much of his work besides a very few things. But I hear his life was just as interesting as his career. So I figured that this would be a movie I couldn't hate even if I wanted to do so. 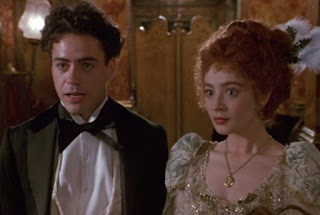 The plot is about the vast majority of Charlie Chaplin's life with a few omissions. It shows his mother Hannah Chaplin (who's neatly portrayed by Chaplin's real-life daughter Geraldine) who was once a small-time singer who loses her nerves while on stage. Charlie saves the day and gets his first taste of the spotlight. Not long afterwards, his mother slowly but surely loses all her marbles. Very few are able to look down on Charlie Chaplin's talents for acting and comedy so he can always find good work. He falls in-love with an Irish dancer named Hetty Kelly who turns down his marriage proposals especially after how little time they knew each other. Charlie Chaplin stays somewhat optimistic and hopes he can reunite with her once he returns from America. But knowing that can take a few years, who knows what will happen to Hetty Kelly. 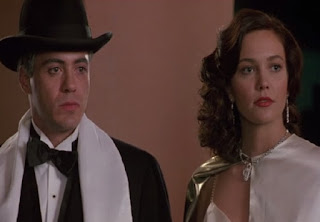 While he isn't famous when he arrives in America, those in the industry know of him. He is personally invited by producer Mack Sennett to star in his movies. Mack Sennett doesn't realize that Chaplin is much younger than he expected at first and belittles him at first because of his youth. But quickly Charlie Chaplin proves his worth, and becomes a name every household in America (and a lot of the world) knows. But Charlie Chaplin has bigger dreams and staying on top will prove difficult. He'll also have to deal with his own personal issues. Like dealing with his insane mother, or his brother than can often harshly criticize what he does. Charlie Chaplin will marry and divorce many times as well. And he'll get into a lot of controversy when things get political. Especially as he's accused of being a communist (like many others in Hollywood) during the Red Scare. 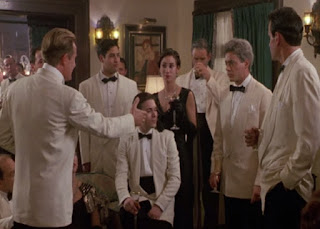 Overall I really liked Chaplin and I was a little shocked that critics didn't quite love the film quite as much. Robert Downey Jr. is amazing as Charlie Chaplin and I think it's the 2nd best depiction of a famous person next to Daniel-Day Lewis as Abraham Lincoln in the 2012 movie Lincoln. He was thankfully respected for this role as he was nominated for an Oscar for Best Actor but lost to Al Pacino in his role in Scent of a Woman. Many criticized the film for historical inaccuracies but I'd say it was much better than I had expected in that area. While Charlie Chaplin was a flawed man, he often didn't deserve the hatred he endured in the later-half of his life. I did wish they had showed his friendship with Albert Einstein who is absent in the story. Though I can't imagine any fan of Robert Downey Jr. or of Charlie Chaplin could actually hate this movie.

Oh, I like the fact his daughter plays his mother!

Yes, I remember going to and enjoying this movie too. I think it was the first thing I ever saw RDJ in and I too thought he was robbed by Al Pacino for the Oscar.

I remember thinking this was a pretty good movie.

He sure did a great job indeed