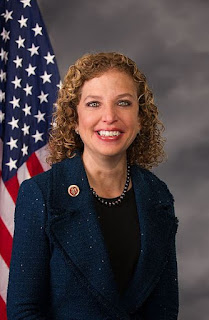 The Democratic National Committee is basically the governing body of the Democratic Party. It's Chair (leader) Debbie Wasserman Schultz has announced she will resign after the Democratic National Convention is over with. This is after news broke that proved that she and her pawns sought to make sure Bernie Sanders would not win the primary. I can understand the logic of party leadership on the matter, but that's just a line you can't cross. Hopefully the new Chair will help abolish the practice of super-delegates. We don't have super-voters in the general, so we don't need super-delegates that are not influenced by democracy.
Posted by Adam at 11:00 PM

Debbie was instrumental in getting Obama re-elected for which I'm grateful. As for Super-delegates; they've been around for years and if Bernie didn't understand how they work, it's probably because he isn't a Democrat and hasn't been paying attention.

Yes, Bernie fully understood how superdelegates work. As for the "he isn't a Democrat" meme, let's not forget that he has always been far more loyal to the Democratic Party than "Blue Dog Democrats", who have aided Republicans in derailing Obama's agenda, unlike Bernie, who has usually voted to support Obama. Also, you don't have to be an official member of the Democratic Party to understand what superdelegates are.

I agree with your analysis, Adam.
It will be interesting to see what Bernie Sanders has to say
at the convention. His speech/address will be on in Australia
sometime this afternoon ( Tuesday 26th Australian time).
No doubt here political experts will go through it here with
a fine toothed comb.
For me it is a bit hard to stomach how one person's vote at a Convention counts more than someone else's vote.
B J Hunnicut aka Colin