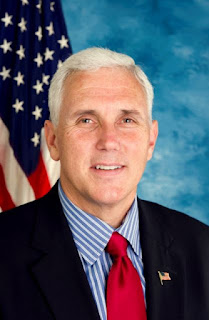 The day is finally here to see who Donald Trump's running mate will be and it's Republican Governor of Indiana Mike Pence instead of one of Trump's bitter enemies during the primary. Before being Governor he was a congressman. Trump's been rather super right-wing during the whole election, and Mike Pence is not someone to balance the ticket out. He's a proud supporter of the Tea Party, and he's been to the far-right side of the crazy bus on all issues fiscal and social. I was hoping for Sarah Palin as that would be another round of comedy gold and she's arguably as unfit to hold federal office as much as Trump. So I guess Donald Trump and Mike Pence will be Making America Hate Again.
Posted by Adam at 6:10 PM

Yes - a sad day for the USA.
All on the early International news here in Australia this morning
with amusing commentaries.
This Mike Pence apparently was up for re-election in Indiana
but he was "on the nose with the electorate". So now a potential VP????
You surely are in JEST mood to even contemplate that Sarah "Moose lovin' Palin" ????
On the International Stage the USA is well on the way to becoming the laughing Stock of the World.
I note the Australian Trade Minister is in Washington, DC to try and keep the USA retaining Trade Agreements for the Asia/Pacific region.
It will be catastrophic if the US with this Trump/Pence triumphs.
B J Hunnicut aka Colin
PS: I wonder if all this silly business with this comedy show is somewhere hidden in one section of the Bible??? If so please direct me to the Text.
With Trump and Pence, the USA G.O.P has not chosen the brightest lights in the electrical shop - seems that the dud lights have won!!

Since I've learned to keep my mouth shut about politics on your blog, Adam, I'll just say I hope you and Daisy are enjoying your new house...

This has got to be the most bizarre primary season I've ever experienced, Adam! And to think I had to listening to Canadians groaning in Victoria last fall about their distressingly long (11 week) election campaign and its negativity (Harper on Trudeau: "He's just not ready."). LOL ~ as for The Donald and his running mate, I just rather not think about it!

Your politics are - if nothing else - interesting. And somewhat entertaining. I'm curious to see what will happen this fall.

I'm surprised he went with Pence, who has managed to piss off almost every Hoosier. We can't stand the guy! Just drive through Indiana and you'll see so many Dump Pence signs. Guess they'll be fitting well next to those Dump Trump signs.

Trump was careful to pick someone that wouldn't steal the spotlight.

Maybe there is a God in Heaven after all - ha ha.
Please give my worst wishes possible, bj, to your friend
Sarah of Moose Land.
Cheers
Collie Wollie Hunnicut