Fact of the Day: Common Krait 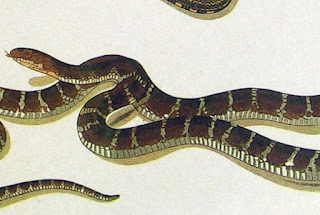 The common krait is one of the biggest snakes in India. It also is the most frequent snakes to bite humans in India though you rarely see them during daylight as they're nocturnal. Their bite have little to even no pain, but their venom is deadly. It's acts fairly slow but will eventually lead (most of the time) into respiratory failure if the person does not get medical treatment.
Posted by Adam at 12:00 AM

Email ThisBlogThis!Share to TwitterShare to FacebookShare to Pinterest
Labels: fact of the day, India

Glad they aren't around my rhyming rear

Uh...let me first say that I'm deathly afraid of snakes, and to have one slithering around in India that bites with no pain at all is pretty dang scary. Of course, I always love your trivia! Hugs...

I'd hate to run into that snake!!

I remember seeing a documentary a long time ago on snakes and I can tell the difference between a venomous and non-venomous snake thanks to seeing that documentary. Thankfully here in Montreal I never see snakes. I am sure we have some but probably garter snakes, which are pretty harmless.