Fact of the Day: Jacobite Rising of 1745 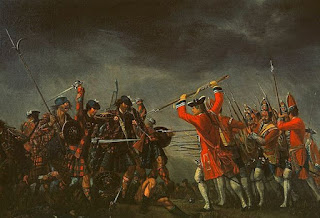 When the House of Stuart's Catholic members lost the throne of Great Britain to their Protestant cousins in the House of Hanover, they were attempts to reclaim the crown. Charles Edward Stuart, a grandson of James II (the last Catholic king of Great Britain) sailed to Scotland and raised a rebellion of Catholic forces. Most of the British military was off fighting the War of Austrian Succession leaving British forces weakened at home. The last battle known as Battle of Culloden had about pretty even odds (though British soldiers slightly outnumbered Jacobites) but was a major British victory. Mainly due to the failed leadership of The Young Pretender of the House Stuart, his forces were crushed with thousands dead. British forces only lost about 50 men.
Posted by Adam at 1:45 AM

Email ThisBlogThis!Share to TwitterShare to FacebookShare to Pinterest
Labels: fact of the day, Great Britain, Scotland

Are you watching the TV series "Outlander"? It deals with this history. The last episode of season 2 which was just aired was about the battle of Culloden. The Scots had swords and the British had guns and artillery. That accounts for the disproportionate death toll.

Yes, this ended the Stuart's return to the throne.

That is rather pathetic, not that war isn't pathetic

Hi Steve
As you seem to be the only US reader of this blog which comes up with historical and geographical facts, something that appears to be not taught in US schools - there is a World outside the 4 square syndrome of Seattle - Northern Maine - Key Biscayne - San Diego and back to Seattle, I suggest you get hold of the book "Burn The Seas" by John Hayward.
This is based on historical facts released for reading of the period of 1939 to about 1943.
I fear if that clown Trump gets to read it then the Rio Grande to the south and the Great Lakes and the St.Lawrence Seaway to the north will never be the same again.
I wonder what the major newspapers of Slovenia in Ljubljana have to say about the "Barbie Doll" Melania Trump.
This will for beginners - I see on what blog that Barbie will a great First Lady. I wonder what the living Bush First Ladies think of this statement and I reckon the likes of Lady Bird Johnson, Nancy Reagan, Mrs Ford and Jacqui Kennedy must be doing cartwheels in their graves.
B J Hunnicut aka Colin