Fact of the Day: Queen Boudica 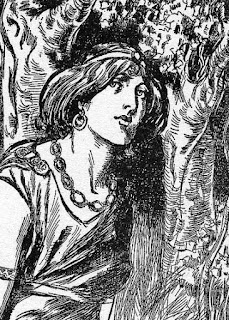 Boudica was Queen of a Celtic tribe in Great Britain when the Roman Empire was present there. Her husband kept a stable peace and independence between himself and the Roman Empire. When he died, the Romans ignored his wishes and annexed his lands. Boudica was beaten, and her daughters were abused by Roman soldiers. Afterwards she led a revolt and caused massive havoc for the Roman Empire. She almost caused Rome to leave Great Britain but that was lost when she was defeated (and killed) with her forces at the Battle of Watling Street
Posted by Adam at 12:00 AM

Well, she sure gave them a good scare. I wouldn't have wanted to live back then. That much I know.

Oh, wow! I love a woman who will fight back and kick some serious butt!

She sure kept them on their toes and went for payback

She hasn't gotten much attention in the history books but that seems to be changing.