Fact of the Day: Vichy France 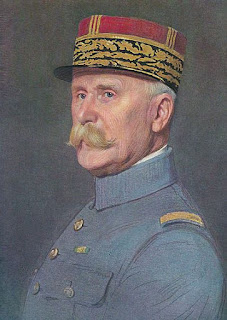 When Germany conquered France in early World War II, they needed their own people to lead a puppet-state of sorts as they had done to other countries during the war. The leader of the pro-German Vichy France was Philippe Petain who had to leave France for Germany once the Allies had liberated most of France. Despite a grim fate for being a traitor, Petain returned to France where he was admired for his courage but not ignored for his mistakes. He was originally sentenced to die, but it eventually ended up being life in prison as he died in 1951 after becoming very ill.
Posted by Adam at 12:15 AM

Good info. Thanks for sharing them...

Heard so much about Petain and this is a good additional info.
Happy 4th!

Good his mistakes weren't ignored, as they were rather big ones

Yes, he isn't thought of very highly in France today.

I never knew all this

Marshall Petain was by the time of the fall of France
really in "ga ga" land.
How you go from a hero of France (WW 1) to becoming
a traitor in WW2 is quite a feat.
B J Hunnicut aka Colin