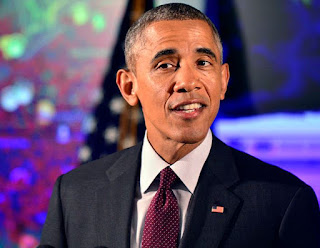 No other president in history has gotten so much hate for no apparent reason from the opposing party than President Barack Obama. Many lies and hurtful things have been said about our commander-in-chief, and this includes bizarre conspiracy theories. When Obama won his 2nd term in 2012, I got in a big argument with a guy who said he'd invoke martial law and get his 3rd term or something like that. Funny how we never hear this anymore now that it's almost time for the general election. Now that right-wingers are doing their best to politically-attack Hillary Clinton, President Obama has been left-alone at least in comparison from 2008-2015. Gray-haired and tired, I can certainly see him rather looking forward to retirement. So sorry crazy guy from 2012, but it's very obvious we'll have a new president next year. And if this country is sane, that president's name won't be Donald Trump.
Posted by Adam at 12:00 PM

I think this is a man who can't wait until it's all over. And I don't blame him.

He seems to be excited for his retirement, and I can't blame him. His job must be exhausting!

I've no doubt that for many it's a racism issue. I'm sure he's thrilled that he's going to retire from all this hatred and madness. I personally have a tremendous amount of respect for this man. He is an intelligent, classy and well spoken individual.

somehow Hitler was brought into power

It is shameful how badly and hatefully Obama has been treated during his term of office. History will NOT be kind to the haters and the racists.

I'm a lot older than you and I can't recall a president being vilified as much as Obama. This man has led us with poise and dignity, even if you don't like his policies, which I do.

I'm a Republican and have about 1000 things to say here...but I respect your blog, Adam, and refuse to start a political war here...sooooo....
hope you and Daisy have a great weekend...

The treatment he has received has been unprecedented and unacceptable - and we all know the reason why he has received such vitriol, even if his critics deny it. I'm sure Obama is happy that term limits exist - he can rest rather than be expected to run for a third term.