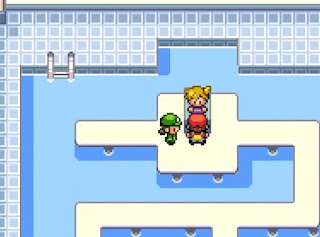 Around 1998 on our school bus there was a girl named Kiki (her name is kind of obvious that her parents did not give her great genes to begin with) and she stated that her church (and she wasn't even in middle school yet) told all the children to stop playing Pokemon because Pokemon were Satan's demons. Since more kids on the bus were Poketrainers than super-religious she was basically booed in a sense to sit down and be quiet. I thought it was something silly she made up but the Christian-right has had a bit of hatred towards Pokemon. Later in life I've heard some weird pastor guy called them "oriental demons" and another case just like it with some church leader saying pretty much the same thing with the super-popularity of Pokemon Go. What did Pokemon ever do to them?
Posted by Adam at 12:00 PM

It sounds to me like those church leaders were just grumpy because they couldn't catch 'em all.

Some churches are just weird. Some of the things they believe...just weird.

Good luck trying to figure out what gets some of those churches' knickers in a twist!

I've never played it but it seems to be incredibly popular.

I remember when stuff like that would be said all of the time! I guess they fear what they don't understand.¯\_(ツ)_/¯

If they're demons, then they're the cutest damn demons I've ever seen.

First time I hear of this!