George W. Bush Concerned He May Be Last Republican President 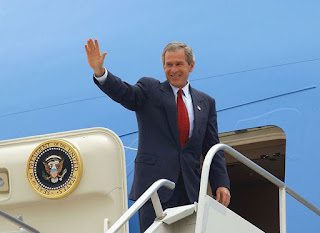 George W. Bush is apparently very concerned he may be the last Republican to ever be president. Donald Trump is nothing more than a joke, with a scary platform and an attitude that will make us the laughing-stock of the world. The 2016 Republican National Convention has given us already a lot to laugh about, but these people are seriously just too right-wing for their own good. Take Mitt Romney in 2012 when he ran for president. He was a "moderate" as the Republican governor of the blue state of Massachusetts, but when he ran for president he basically embraced the ideals of the Tea Party which doesn't really appeal to many voters except the ones who are both Caucasian and Christian. The party in opposition usually is full of bull-crap though the GOP let talk-radio hosts and TV pundits turn their party into a bunch of un-electable lunatics.
Posted by Adam at 4:30 PM

It's scary what's happening, and I'm afraid for our country.

I don't think he has anything to worry about.

I don't know whether Bush will be the last Republican President or not, but Donald Trump might very well be.

The long-term damage that a Trump Presidency could do to the GOP's standing among Latino voters could make Latinos another African American demographic.

Except that African Americans are always 13% of the population. Latinos can't be avoided by people running for national office.

Even by winning, the GOP could lose, right?

It is rather tragic that this fiasco has got this far.
Somewhat akin in Cleveland, Ohio to a Barrum and Bailey
circus which has been taken over by demented monkeys.
The news in Australia on this "who-ha" is embarrassing to
watch, but VP Joe Biden has just recently been here on an
official visit to do with cancer research and at a press
conference he was asked the inevitable question on the elections
and he diplomatically replied - "Don't worry the angels will win".

The other aspect that is so noticeable is the "absence of US tourists", either they have lost their voices or have become tourists
from other countries.?????

Today this Trump/Pence duo of clowns has even threatened the N.A.T.O
member states, either member countries do it the USA or ELSE????

Do American decent citizens, not the born again and again and again Evangelists of the Tea Party, really want the USA to be the laughing stock of the civilised World??
B J Hunnicut aka Colin

Should read re: N.A.T.O - ""Do it the USA way or Else".
I wonder just in case Armageddon -hopefully with no chance does occur, do PM Trudeau of Canada and President Nieto of Mexico have their "portable fences" ready to put up to keep you all in???
Colin

I never thought Trump would get this far. At first I thought it was a joke...