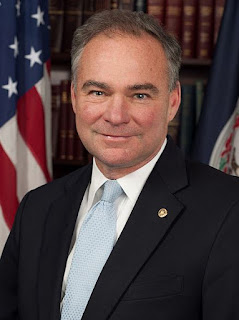 With all the craziness from the RNC going around, many were wondering who'd be Hillary Clinton's running-mate as the DNC is to take place soon. Clinton has chosen Tim Kaine who is a Senator from Virginia to be her choice for Vice President. I've known a little about Kaine and he seems to be a decent guy, but many aren't very thrilled with her choice. Kaine was certainly somewhere close to center, and I really think Clinton needed someone really progressive to bring in disgruntled Bernie Sanders supporters. He's certainly not a negative choice, but the Clinton camp does lack a lot of excitement and energy that was behind President Obama's two campaign's.
Posted by Adam at 11:00 AM

He doesn't have to be exciting; he's not racist madmen like Trump and Pence.

He was better than I had expected, but I hadn't expected much.

By all accounts Tim Cain seems like a qualified genuine person. I think he'll be a good choice and I'll definitely be voting for the Democratic ticket.

He certainly has good credentials. Mayor of Richmond, Governor of Virginia, Senator of note having been good on congressional committees, what more do you need??????????????????
Certainly from political pundits here, he has far more depth of ability than Pense.
I think he is a very good choice.
B J Hunnicut aka Colin