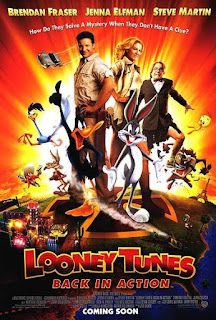 I don't think I even remember Looney Toons: Back in Action when it came out in 2003. Of course I remember Bugs Bunny and his friends through many re-runs. To be honest, Looney Toons was never quite my favorite show though it had its classic best moments. Though I do remember Space Jam was a big success and I really liked it back in the 1990s. I guess they were hoping for a similar thing with this one. Except everyone loves Michael Jordan, however Brendan Fraiser doesn't quite have the same kind of appeal. Unless you consider basketball skill and awkwardness on the same level of talent. Then they are both amazing at what they do. 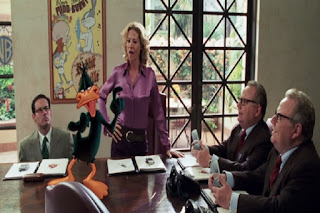 The film like Space Jam has the classic cartoon characters interacting with the real world. Bugs Bunny and Daffy Duck are considered more like actors than imaginary characters. Daffy Duck however is quite fed up with how he's been treated. He's quite jealous of Bugs Bunny and demands that he be treated equally or better. Obviously nobody cares for the duck's wishes and he's left unemployed and his pride shattered. On his way out he ends up getting a security guard named DJ Drake sacked as well. DJ ends up going back home to feel miserable and Daffy Duck follows him there. DJ's dad is a famous movie star named Damian Drake and he gets a distressed message from him that he needs help in Las Vegas. 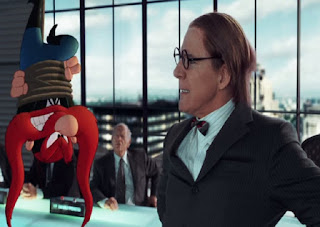 His dad Damian Drake is kept a prisoner of the Acme corporation and is rather helpless here. The leader who is the evil Mr. Chairman is after something that will change the world for the worse. He also finds allies in the Looney Toons characters who are often considered to be antagonist themselves in the original cartoons. Even though he has DJ's father, he knows DJ and Daffy Duck are a big obstacle to his evil overall goal. Meanwhile the woman who terminated Daffy and DJ, Kate Houghton is tasked by her bosses to find Daffy Duck and bring him back as the story isn't quite the same without him. Bugs Bunny tags along but neither of them will be quite ready for what will come next. 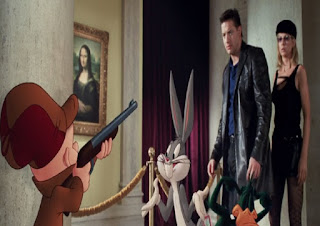 Looney Toons: Back in Action is not as bad I had feared but I can certainly see why it's been rather forgotten about. The plot is a rather generic story, and the jokes go back and forth between smart-silly and stupid-silly. I did enjoy a lot of the many cameos in the movie, especially a cartoon Shaggy Rogers (voiced by his original voice actor Casey Kasem) talking bitterly to his real-life actor Matthew Lillard from the then-recent Scooby-Doo movie. It's probably not the worst thing that Looney Toons has ever done, but far from the best. There's never been another one like it since then so maybe they learned something. But to be honest even though my words are a little harsh critically, it is still a rather decent comedy movie.

Nothing compares to Bugs Bunny in the late 40s. Those things still make me laugh.

Nothing compares to Bugs Bunny in the late 40s. Those things still make me laugh.