My Favorite Photos: Before Fireworks 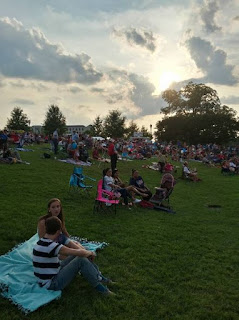 We wanted a good spot so we got to the Fourth of July event a little early. Still plenty of people there but we managed to find a good place. The crowds came pouring in later so there was a lot of people by the end of the night. Before fireworks they had musicians on stage. Some country singer named Adam Craig and a kid named Maggie Thompson who was obviously in-love with Taylor Swift's music and ones like it. She certainly had a singing talent, if she keeps getting better she can become someone like Taylor Swift. 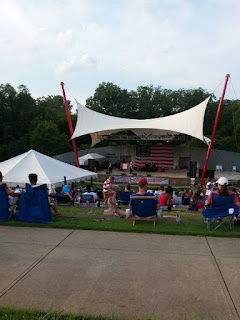 There was a guest speaker there representing the Knights of Columbus which are a fraternal group like the Freemasons but with members who are all Catholic. The main guy spoke saying the Knights were fully responsible (a bit of an exaggeration but there is a lot of truth to it) for putting "under God" in the Pledge of Allegiance and proudly admitted to defending it from being taken out today. I'm a big believer in the 100% separation of church and state and I was quite ticked off by these guys. The words might seem like "no big deal" to many but I see it as people who are spitting on the First Amendment. I'm a bit ashamed of my city and I really hope City Council didn't actually personally invite these guys to speak. If they don't represent all the people in Spartanburg, why give them the microphone?  I also think it's ironic when American Catholics are in favor of putting God in government as there's quite a notable amount of right-wing Protestants who think Catholics aren't really Christians.
Posted by Adam at 5:00 PM

The Catholic Church needs to make a lot of changes.

I would have liked to have heard text of the message.
The "Knights of Columbus" here in Australia are certainly
non-political and do much charity work in many fields.

I am surprised that you are not mentioning the recent "Gunfights
at the OK Corral" in downtown Dallas, TX.
Seems that guns now rule the USA. Like "have gun, will shoot".
Amend that part of your Constitution would be far more sensible, eh?
B J Hunnicut aka Colin

The idea of a separation between church and state was one of America's best ideas. Too bad many conservatives don't believe this. Of course they would if THEIR religion was marginalized.

Hi, Adam! So sorry I haven't visited in way too long! This has been the craziest year! Terry and I were recently in Hove, England. We happened upon a Wild West miniature golf course at King Alfred playground. I was thinking of you and Daisy all the time I was there ~ couldn't get Terry to play miniature gold though ~ we'd been walking for miles and had a long walk back to his sister's home. Hope all is well with you, Daisy, and family!

I agree wholeheartedly with you, Adam, about 100% separation of church and state! That's what I want in Canada, as well.

We get there early to get the best seats too.

Correction: The US "Knights of Columbus" - named after the founder of the New World, Christopher Columbus, the name here in Australia for the organisation is "The Knights of the Southern Cross".
Colin