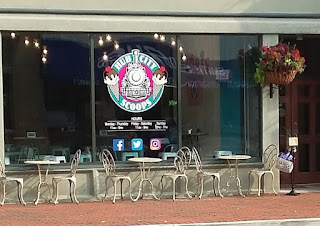 Hub City Scoops is a new ice-cream place in Spartanburg, SC. Hub City is a direct reference as its the city's nickname, so you shouldn't see one in yours at least under the same name. The ice cream is apparently made in Wisconsin which is far away from South Carolina. It was on the way to our Fourth of July event, so we decided to see if it was any good or not. 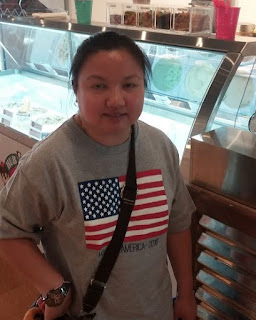 The place is pretty small though not much larger or smaller than most other ice cream places. It shares the building with some other place but the two rooms are divided by a hallway. They had plenty of people working there and they all greet people in unison when you come in. The flavors are about standard anywhere. 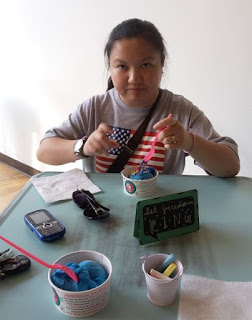 Daisy and I usually get different things but we ended with the same dessert which was called something like Blue Raspberry Italian Ice though it's not the Italian Ice I'm used to. It was like ice cream that was very thick and almost had like a taffy feel when you moved it with the spoon. It was good though. All the tables are painted with chalk paint and distressed which is popular with women these days. While there exists an actual chalkboard paint, you can write on this stuff with chalk (they leave it on the table too) which reminded me of a restaurant we used to have called Garfield's which had paper table covers and crayons.
Posted by Adam at 5:00 PM

Oooh....I love to see store fronts in various parts of the world, Adam! Thanks so much for sharing. :)

You remind me that it's been ages since I enjoyed ice cream.