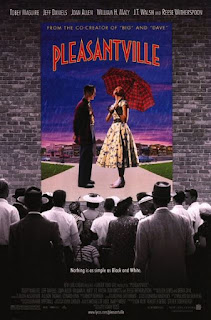 I'm pretty sure I remember hearing about the movie Pleasantville back in 1998, but I don't think it was a movie I wanted to see when I was just about ten years old. This was a few years before Tobey Maguire would become the first major film version of Spider-Man. This was one of the first big movies for Reese Witherspoon though I only noticed her a few years afterwards when she was the star of Legally Blonde. I was also pleased to see Don Knotts in the movie as the world lost the legend less than a decade later in 2006. And I noticed Jeff Daneils as well, I had often wondered if he was in anything after Dumb and Dumber until a few years ago when I realized he was in more serious movies. Critics liked the movie for the most part and Roger Ebert claimed it was one of the best and most original movies of 1998. Now that's it's been almost twenty years (I'm starting to feel old saying that), it's had time to age. Now is the movie Awesomeville, Horribleville, or just... Pleasantville? 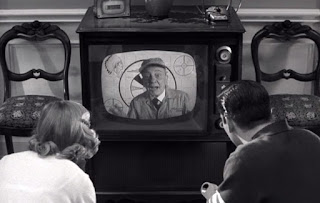 The story is about the lives of a set of twins. The brother David is very shy and likes to watch TV a lot and has few friends. The sister Jennifer is very popular at school and often only cares about cute guys and her friends. One of David's favorite TV programs is an old one called Pleasantville where he knows virtually every moment of the series. A big marathon is set to happen on the same night where Jennifer has a big first date where they were suppose to watch a concert on MTV. The two siblings fight over the control of the living-room TV and they end up shattering their remote control. A TV repairman shows up seconds afterward and gives David a very strange one. After more feuding, the two siblings are transported into the TV itself. The TV repairman was no ordinary guy and wanted to give David the "gift" of living in the "paradise" known as Pleasantville. The two take the place of Bud and Mary Sue whom are the main characters of the fictional show. And everyone in town (including their "parents") thinks they're the "real" Bud and Mary Sue. 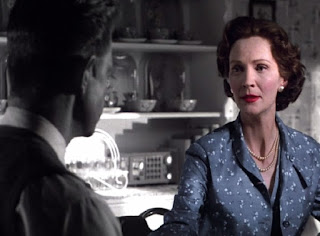 Life in Pleasantville is like a very classic memory of a "perfect" era of the 1950's. Since it's Pleasantville everything is nearly perfect. Wives take care of their husbands, children obey their parents, the basketball team always wins their games, and everything about life rolls super-smooth with no bumps in the road. The TV repairman won't led David and Jennifer return to the real world unless they change their attitude. David believes that they should act like the real Bud and Mary Sue and act like the characters in the fictional world. Jennifer is quick to ruin David's plan and does things that characters in the show never knew existed. Like going beyond "holding hands" in a relationship and shattering all rules of politeness. Then things start to change in the town and bits of color start to appear in the town of black and white. Which will eventually lead to characters learning new things and the rise of "problems". 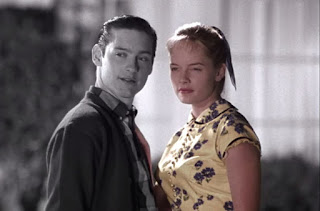 I pretty much figured I'd love Pleasantville and it's a really good movie. Some of the parts move rather slow, but the story is so unique and well-done. The visuals of the world slowly becoming a land of "color" still looks good and amazing today. There was a few things I wished the story could have done better. Like there was a big romance between David/Bud and Margaret but it never had much time to bloom. And Jennifer/Mary Sue goes from important to almost forgotten about. I also like it being a metaphor for the "culture wars" of conservative times becoming more liberal. The 1950's weren't exactly pleasant for those who weren't middle-classed and Caucasian and the treatment of women back then was far from "moral". The movie was written by Gary Ross who also wrote Big and Mr. Baseball, so he wrote another fantastic story with Pleasantville.

I saw this movie when it came out and the only thing I remember about it is when characters turned into "colour characters" once they started transgressing against the very strict and oppressive rules of Pleasantville. Thanks for your very good review -- it made me remember more of the details!

I remember liking this movie when it came out.