Question: Do You Think Donald Trump Will Actually Accept the Nomination? 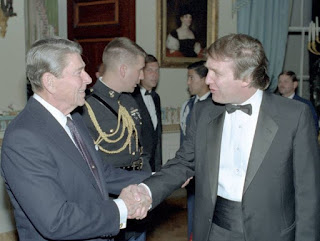 2016 was not the first time Donald Trump ever thought about running for office before. He's apparently had some kind of involvement since the late 1980's but never had anything super-serious until this election cycle. All previous times he's always quit before he could lose. Granted he stayed for the entire primary, but with a very large unfavorable rating among many groups of Americans it's hard to say if he can actually win the general election. The Republican National Convention will officially nominate him later this month which leaves him some time to back out and thus Republican leadership will have to find a replacement. I still can't tell if he's serious or just enjoying the massive amount of attention.

Is Trump serious or still just another reality TV show star?
Posted by Adam at 12:25 PM

I can only hope he doesn't become president.

i really don't know him, but a lot of people say that Rody Duterte, our President today here in Philippines is like Donald Trump. #justsaying

Our country is in big trouble for qualified candidates.

From Moscow with Love?????
Colin

I did hear Putin wants him to win. Even Kim Jong-Un. More of a reason to not vote for the chump named Trump

The very thought of him in the White House sends shock waves around the
World.
I wish the Republican Party would just have "the balls" and disown
the bloody clown.
I don't really fancy being blown up by that maniac come January 2017.
B J Hunnicut aka Colin

I'm sure Putin said it in jest, just to make fun of the G.O.P.
of the USA.
Probably regretting being quoted as November gets closer.
As for what that Ning-Nong of North Korea says, who cares.
The man or boy should be caged for exhibition releases in circuses.
Colin

I've asked myself this question many times. It's hard to imagine he'd want to work as hard as a president, but then his ego is colossal and the presidency is the biggest prize possible.

I believe he's going to go for it. If he didn't want it before, the fact that he's considered the underdog now will make him want it.

I'd say the best thing these two candidates have going for them is that they're both running against thoroughly unlikable characters.

I didn't think this would last thing long. In the beginning I thought it was a joke.

I don't know whether he's a showman or insane. Probably both. He definitely acts like a spoiled brat.

Well....I hope SOMEone has the balls to indict HC....
and,yes, sir....Mr. Trump is dead serious about winning.

Well - one thing for sure. We'll all be dead if the Buffoon
triumphs.
I didn't realise that you had such a dedication for death
or perhaps you think you are a cockroach. This species
can survive a nuclear bomb.
Don't worry about the Trump walls, the World will build walls
to keep the likes of you in.
Colin