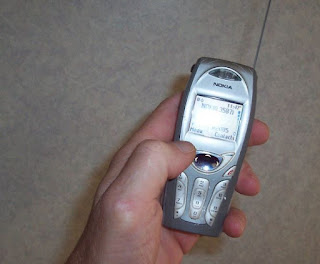 I remember having a few "first" phones after high school in like 2007-2008. I tried to go without one but it is certainly nice to have one whenever you need it. Mine had always been a dumb-phone since I refused to be part of that data-plan garbage. To make up for that I had two iPod Touches over the years and now I have a Samsung Galaxy Grand Prime that can't make calls until I want it to be able to.

Do you remember your first cell phone?
Posted by Adam at 12:00 PM

I am still using my first one, a Nokia 1110. Got it in 2006. It suits and serves me perfectly in calling and texting, just in case of...
Don't want or need another one!
Cheers,

Oh wow, blast from the past. My first cellphone was a crappy Nokia flip phone with one of those LCD screens on the front. I had it in my pocket, and within an hour of owning it the LCD busted. It was so flimsy. Took it back, and the guy said that cellphones should never be put in pockets, only in those dorky 'holsters', so it was my fault. I just lived with it until I got another one. What a moron.

it was a Nokia I think, very primitive compared to today's smartphones

No, as do not have one.Lived 87 years without one. No need now.

My first cell phone was somewhere around 1995. I don't remember the brand, but it looked like a black walkie talkie.

I think mine was a Nokia. Quite bulkier than today's phone. And primitive.

I've never had one.

Talk about blast from the past! I still remember mine as well: a Motorola StarTac. I remember it clearly coz I got when I moved out and lived on my own for the first time.

I can't remember what I first had...now we have ones for old people...I am about to die for a smart phone..how cool to have the internet at your fingertips...I would love one but Social Security frowns on spending money unless absolutely necessary..like eating...boo...hiss

No one wants to be in a situation where we distrust our wife or girlfriend but with statistics showing that with a climbing divorce rate a climbing rate of infidelity is also tied in to this. Many men ask 'how do I track my wife's free phonecalls' out of desperation and a quest for the truth to either set their minds at ease or be informed enough to take the appropriate action.