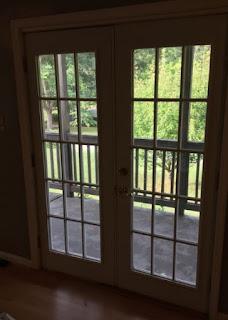 At my new house, we have a french door in the living room. I like my living room as it gives a lot of natural light which means I don't have to turn on a single light-bulb until the sun goes down. My mother-in-law was pestering us to put something on it to cover up the french door so nobody could see in at night. She was talking about a curtain but I don't really like curtains. So I chose to make the windows frosted instead. 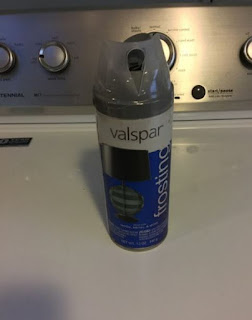 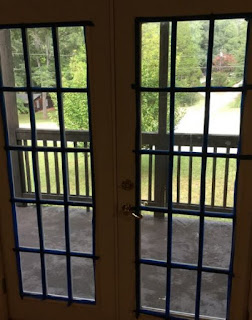 Even though the spray is "clear" I used painter's tape on it just in-case. It's a pain to put them on all the little strips of wood around each piece of glass. 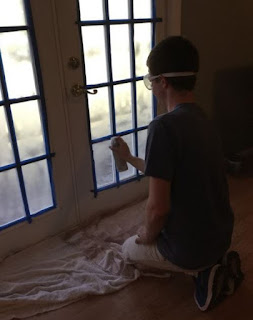 The spray tells you use about 2 thin coats and you won't get much effect with one thick coat. I ended up using 2 thin coats and a 3rd coat of touch-up. You don't have to wait until it's dry to re-coat which I'm thankful for. It will make your house stink, so get ready to leave and go somewhere for a few hours. 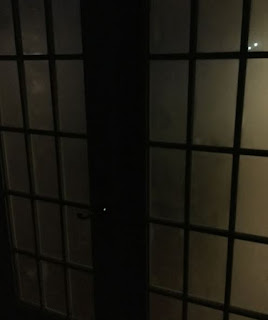 There are a few edges that never quite got there, but nobody is going to be able to see inside now. And Daisy's mom will stop nagging us about it too.
Posted by Adam at 5:00 PM

I've never heard about this spray before... Interesting to know!

I like your idea. I like things nice and bright too and French doors are really nice.

Sorry, I would never cover the french doors. I doubt anyone would be looking in unless you live on a busy street.

the thing is now you can't see out of them in the daytime. We did choose frosted glass for our basement windows as they are high up and we never look out of them.

Im not sure about this even though I like the frosted look. You did a great job and it makes since. Im pretty sure it can be scraped off later if you decide too. But you cant see outside now!!! A shade that you can roll all the way up during the day and down at night would have been my solution. But again. your doors do look lovely.
Lisa

We used a frosted film in our bathroom on the windows. Easy on, easy off. I am not sure I would have painted the french doors. I loved them before and now you won't get as much natural light in the house.

Nice job! It does take time to prepare for the painting with the tape but the results are always better.