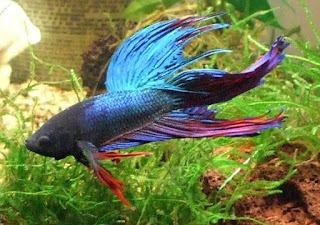 I once worked with a girl named Savannah who was usually nice, sweet, and fairly good-looking, but in the brains department she wasn't very bright. Her grandmother lived down the street from us and she was a rather strange lady herself. I once had my own betta fish and she brought up the fact that she once had one too. But whether it was a family decision or not, they no longer wanted to be betta fish owners. So instead of finding someone to take care of it, they decide not to feed it ever again. And this apparently lasted many days before the fish finally passed away. I do pity the fish, that was not a good way to go. Responsibility of pets is not for everyone but everyone should have the decency of finding a new care-taker before they cast their pets into the realm of suffering.
Posted by Adam at 12:00 PM

Oh no, that is awful. Now I wonder what other dark secrets Savannah and her family might be hiding.

Oh, that is terrible!

that is awful, some people!

Wow, what a horrible thing to do. At least find it another home.

I've owned beta fish. I love those little creatures. I had one once, I could not wait for it to die because it was soooo sick. I continued feeding it, cleaning its water and taking care of it. It had lost its tail and fins and turned skeleton looking but just would never die. I felt so sorry for him. I eventually called him "Zombi Fish". He finally died in peace but was love until the end. int had one since.
Lisa

Bettas are hard to keep alive under the best of circumstances. I'm not fond of them but I'd never let one starve to death.

I think if I knew of this cruelty I would have reported it to
the appropriate authorities.
Not much use writing about the "deed" after the fact.
Colin

What a cruel, slow death for that poor fish. Savannah and her family need a good butt kicking it seems.