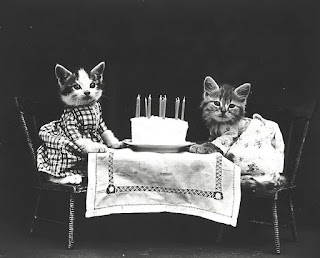 When I was younger we were at a week-long "summer" camp called Junalaska that we went to because our Methodist church always went every year. We only went one year, and it was a better experience than one other camp we went to. I actually had my birthday during one of the days and during one of the meals they called me and some girl up because it was our birthdays. After some kind of "celebration" that lasted less than three minutes I got a plate with a birthday brownie on it. I never really liked brownies (I like fudge much better) but I ate it anyway. I didn't know quite what to do with the plate as it wasn't paper or styrofoam like the rest we used. I was too shy to ask and nobody ever told me nothing about it. So I just left it somewhere near the cafeteria outside as that's where we were when I was done. I figured if they wanted it back, they'd find it.
Posted by Adam at 12:00 PM

Only one-way plates? That is not good, glad you got your birthday brownie on a proper plate. :-)

Funny, the things we remember. I was very shy too and that sounds just like something I would have done.

sounds like it was a bit of an uncomfortable situation, they meant well

I'd do the same thing too.

Look on the bright side...you didn't eat the plate.

Look on the bright side...you didn't eat the plate.

I probably would have done the same thing too.
At least they remembered your birthday. : )
I love brownies!! : )

I probably would have done the same!

If it was reusable I'm sure someone reclaimed it.