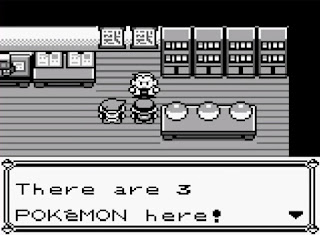 In the late 90's Pokemon became one of the biggest things ever. I never heard of it until after a baseball game. We went to one of our team-mate's houses and everyone got their Gameboy systems out and played Pokemon Red/Blue...except me. I wasn't actually that late to the Pokemon train as it was well before Gold/Silver but I did feel awfully left out for a few days until I got my own. It brought me some good times as the fun part of the game was trading and battling your friends with the little link cable. Pokemon Go is out on mobile phones now and it's very much doing the same thing that Red/Blue did back in the day. I don't think many parents from the late 1990's actually expected their children to be off on another Pokemon quest when they grew up almost two decades later.
Posted by Adam at 12:00 PM

It sure is all the rage, and it's funny because a lot of the Pokemoners I've seen running around playing look about 25 to 30 years old. I'm glad some people don't loose the inner child.

It seems to be bringing in a lot of community bonding. But, people need to use their heads and stay off of private property when chasing them. Our police force is tied up responding to calls of strangers roaming around in private yards trying to catch Pokemon. It's ridiculous!

Have you tried pokemon ok? It's pretty addicting! And super fun! ;)

The police are not too happy here in Australia also, Theresa.
Idiots just walking out into the traffic.
Colin

I have an addictive personality so it's best I stay away from this game.

This new game is taking over the world! Well, it's not available in Canada yet, maybe a good thing.

I still have my Nintendo Gameboy with the Pokémon Red game.<3
Pokémon GO is literally a dream come true; I've even seen many people have bbq's at the park while they all help each other catch Pokémon! Hahah