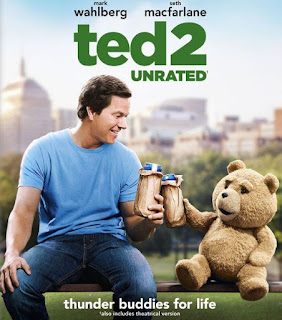 The original Ted was a movie I liked, but didn't quite love. It came from Family Guy creator Seth MacFarlane and it certainly was not quite on par with the funniest of the original seasons of Family Guy. I also thought it was a little strange (given his talent for voices) that Ted sounded just like the dad of Family Guy Peter Griffin. But Mark Wahlberg and Mila Kunis were pretty good in it, and then they ended up getting rid of Kunis' character. Which was more than a little stupid as she was so important to the plot and made part of the ending seem meaningless now. She was basically replaced (with another character) by Amanda Seyfried who I actually like more than Kunis and she's also one of my wife Daisy's favorite actresses. Though I don't think Daisy watched the original with me, so I saw the sequel alone. 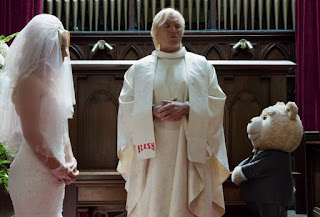 The story begins a good bit after the events of the first film. The magical talking teddy bear Ted gets married to his girlfriend Tami-Lynn and everyone is happy for them. Ted's best friend John Bennett stays a little depressed as he got divorced from his wife Lori Collins a little while back. Things don't go too great for the newlyweds as their marriage is in shambles about a year later. A friend gives Ted the not-so-great idea that a baby will solve everything and glue his marriage back together. The problem is that Ted obviously can not have biological children with his human-wife Tami-Lynn. John and Ted think of some ideas, most of which are really dumb. Though they eventually have some logical ones to give Ted the bliss of fatherhood. That's assuming that everything will work out in the end for Ted and his wife. 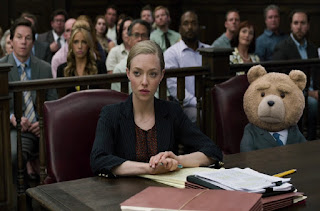 Since Ted is a talking teddy-bear, the state of Massachusetts realizes that Ted should not be considered a person. To make matters worse is that Ted now can't be a father, nor does the state of Massachusetts think he can even be a husband as they destroy his marriage on-paper though his wife still stands by him. Since they are not wealthy, they get enough pity to be represented by Samantha Leslie Jackson who is a young new attorney. Ted is something the world never saw before, but arguing for his person-hood will be a tough challenge. Especially as Samantha L. Jackson has never worked another case before. And there is someone from Ted's past lurking in the shadows who's hoping to get revenge on the teddy bear and his best friend. 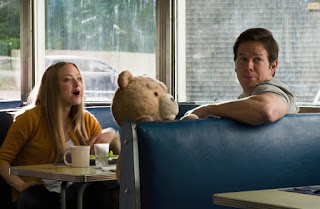 I can say that Ted 2 certainly did not deserve the mixed critical opinion it got last year. It was about on par with the original though I think I liked this one a little more but not by much. While I like Amanda Seyfried I didn't think she had much chemistry with Mark Wahlberg especially as he's much older than she is. I'm a big fan of dark humor which this relies on heavily so it's certainly not for everyone. Some have said that the jokes in the movie are too juvenile, but they really do have more wit in them than what you see with more recent comedies by Adam Sandler and other SNL alumni. I did think the improv comedy club scene was brilliant and it made me laugh a lot. But everyone knew Ted 2 was never going to win an Oscar anyway. I hear they are serious about making a Ted 3, so while I'm probably not going to see it in theaters I will be glad to see it about a year later like I did with the first two.

Probably not a great movie, but I did laugh my head off.

Sometimes you just need to sit and watch mindless humour and pretend you are 13 again!

I wasn't a fan of the first, so we skipped the second.